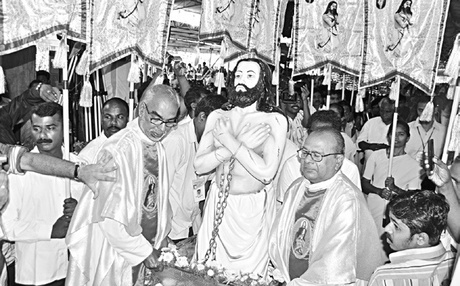 Pope Francis has approved two candidates for canonization, including Devasahayam Pillai of India, an 18th-century Hindu convert to Catholicism.
By Robin Gomes

Pope Francis on Friday authorized the Congregation for the Causes of Saints to promulgate 8 decrees regarding 10 candidates, clearing two of them for sainthood.

Devasahayam
Among them is Indian martyr, Blessed Lazarus, called Devasahayam, an 18th century high-caste Hindu married man who converted to Catholicism.  A decree acknowledged a miracle through his intercession that cleared him for sainthood.

Born on April 23, 1712 as Neelakanda Pillai, in the village of Nattalam, Devasahayam served in the palace of southern India’s Hindu kingdom of Travancore, which stretched from what is Kanyakumari District today, right up to Cochin in Kerala state.

At Baptism in 1745, he assumed the name 'Lazarus' or 'Devasahayam' in the local language, meaning ‘God is my help’.  However, his conversion did not go well with the heads of his native religion.  False charges of treason and espionage were brought against him and he was divested of his post in the royal administration.  He was imprisoned and subjected to harsh persecution. A Catholic for only seven years, he was shot dead in the Aralvaimozhy forest on January 14, 1752.

Sites linked with his life and martyrdom are in Kottar Diocese, in Kanyakumari District of Tamil Nadu state.  His tomb at St. Francis Xavier Cathedral in Nagercoil attracts large numbers of devotees.

Devasahayam was declared Blessed on December 2, 2012, in Kottar, 300 years after his birth.

In remarks that day during the midday “Angelus” prayer in the Vatican, Pope Benedict XVI recalled Devasahayam as “faithful layman”.  He urged Christians to “join in the joy of the Church in India and pray that the new Blessed may sustain the faith of the Christians of that large and noble country.”

Pope Francis also acknowledged a miracle attributed to the intercession of Blessed Maria Francesca di Gesù (born: Anna Maria Rubatto), that clears her for canonization.  The foundress of the Capuchin Tertiary Sisters of Loano was born in Carmagnola (Italy) on February 14, 1844, and died in Montevideo (Uruguay) on August 6, 1904.

The canonization of these two candidates will be decided at a later date.

Carlo Acutis
Another miracle was recognized through the intercession of the Venerable Servant of God Carlo Acutis, a layman.  He was born on May 3, 1991, in London (England) and died on October 12, 2006, in Monza (Italy).

The young catechist had an ardent devotion to the Eucharist and the Virgin Mary.  A normal boy who loved studying and playing football was also worked for homeless people and helped in soup kitchens.

He is known for documenting Eucharistic miracles around the world and cataloguing them all onto a website that he himself created in the months before his death from leukemia at the age of 15.  He has been cleared for beatification.

Martyrdom of Grande
The Pope also recognized the martyrdom of the Servants of God Rutilio Grande García, a Jesuit priest, and his 2 lay companions, who were killed in hatred of the faith in El Salvador on March 12, 1977.

Murdered before the start of the Salvadoran civil war, Father Grande, who was a close friend of fellow Salvadoran and martyr, Saint Oscar Romero, became an icon for human rights in rural Latin America.

Known for his vigorous defence of poor, the Jesuit priest, an elderly man and a teenager were shot by a right-wing death squad as they were travelling in a car outside the village where he was born.

The horror that the assassination of Fr. Grande generated led Archbishop Oscar Romero of San Salvador to take up the Jesuit’s mantle as a defender of the poor.  Three years later, Romero would succumb to the assassins' bullets for his outspoken criticism of the military and work on behalf of El Salvador's oppressed.

The decree on the martyrdom of Fr. Grande and his two companions does away with the need for a miracle through their intercession to qualify for beatification, the final step before sainthood, for which a miracle would be required.  The beatification date will be declared at a later date.

Heroic virtues
There were also 4 decrees on the heroic virtues of the following candidates:

- Servant of God Emilio Venturini, a diocesan priest and founder of the Congregation of the Sisters Servants of Our Lady of Sorrows.  He born in Chioggia (Italy) on 9 January 1842 and died there on 1 December 1905.

- Servant of God Emilio Recchia of the Congregation of the Sacred Stigmata ( or Stigmatines). He was born in Verona (Italy) on February 19, 1888 and died there on June 27, 1969.