20 People Die in Clashes in New Delhi, India over Citizenship Law that Discriminates against Muslims 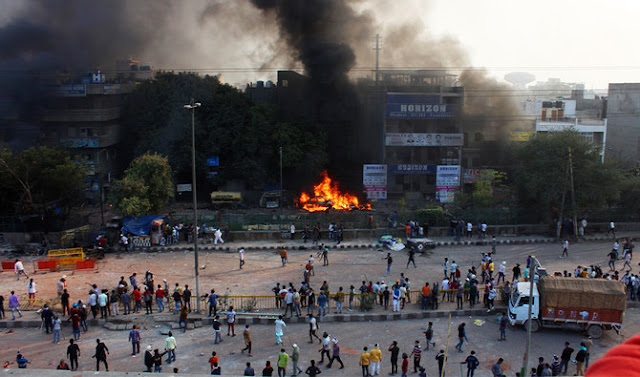 Religious community violence in Delhi, 20 victims: it is 'state terrorism'
The clashes have been raging for four days. Videos show the police standing by without intervening in beatings. Two mosques desecrated. Archdiocese spokesman: "India owes its freedom to non-violent struggle".


New Delhi (AsiaNews / Agencies) - The toll of religious community clashes in the Indian capital has risen to 20 victims, which continue for the fourth consecutive day. The neighborhoods affected by the protests are those in the north-east quadrant, mostly inhabited by the Islamic population.

The clashes are the result of the new citizenship law, which discriminates against the faithful of Islam. Speaking to AsiaNews A C Michael, a former member of the Delhi Minorities Commission, condemns the violence and calls it "state terrorism".

What is happening in the capital, he explains, "can be classified as 'state terrorism'. At first glance, the state machine may not be so visible in these violent incidents. But there is strong and clear evidence that shows that they have the tacit approval of the government or the Minister of the Interior of the Union who is directly responsible for public order in Delhi, given that the police of the capital depend on him. "

Today the areas involved in the clashes resemble a theater of war: destroyed shops, burned cars, bloodstains, fragments of glass and bricks thrown by protesters, piled waste and scrap and set on fire. Yesterday two mosques were also attacked: the first was partially burned and the pages of the Koran thrown into the street; the desecration of the second shows some people trying to tear the crescent from the top of the minaret.

From the amateur footage circulating online, Michael continues, “you can see the police watching the people who are hit, those who shoot and more. The agents allowed supporters of the [anti-Islamic] law to organize their protest close to that of the opponents that was already underway. It is certain that the police agreed with these people, who were thus able to carry guns and swords without difficulty in the places of the protest. "

According to Fr. Savarimuthu Sankar, spokesman for the archdiocese of Delhi, "the right to protest is one of the fundamental rights guaranteed by the Indian Constitution. Unfortunately, however, all protests and dissent are labeled anti-national and those who participate in the demonstrations are called traitors by Hindutva groups. The violence perpetrated on demonstrators by the police and others is unprecedented. "

The priest recalls that "India has obtained freedom through the non-violent struggle led by Mahatma Gandhi. We appeal to central and state governments to identify and arrest the perpetrators of these horrific violence and provide adequate security for those attending peaceful rallies. " (A.C.F.)


Full Text Source: Asia News IT
Posted by Jesus Caritas Est at 7:45 AM

Islam is against Terrorism Terrorists are not following Islam. Allah says in Quran whoever kills a soul unless it is as though he has killed all mankind. Muslims Are Not Terrorists and whoever saves one life it is as if he had saved mankind entirely.