A Priest in Pakistan shares his Vocation - in a Country where Christians are Persecuted an Encounter at Holy Mass Inspires! 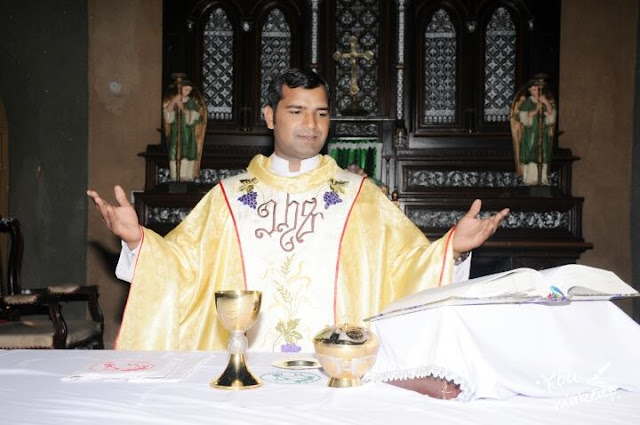 Faisal Pervaiz, is a priest in Pakistan, a country where Christians often suffer persecution. He uses his faith to reach others through social media with many friends on Facebook.  Here he explains his path to the priesthood and his daily priestly schedule (an inspiration to many!) His favorite Saint was St. John Vianney.
It was my wish from my childhood to be a good Pakistani solider, for this I was very excited. I always took part in games, especially in wrestling. I wanted to be more strong and healthy to be fit for army when I was studying in Shahadara Lahore School, I regularly prayed on Tuesday the( Holy Mass) Novena of St. Anthony. Every Tuesday I sat in my Classroom after school time do my home work and when there was time for Church I went straight to go to the church and after Holy Mass i returned to my home. My home was 7 kilometer far from my School and church. One day there was no one who could read the reading from the lectionary,  so, Fr. Tariq Isacc, for the first time pushed me up to read the reading in the church. After the holy Mass one lady came to me and asked me to be come a priest. I immediately responded that I wanted to be a solider - she replied that that as a priest you become solider of Christ I said I wanted to join Pakistani Army. She replied that it is a army of Christ you should go for that after some conversion she finally said I am not forcing you just take a time and think about it. I said ok.
Then in those day there was a program for vocation promotion namely "Jashan-e-Bolahat" so my Uncle and Aunt Suggested I go there. so in 2004 i participated in that program there just to make fun I said I will become a priest . it was first time I said that I will be a priest in future there was also another reason that after my matriculation completion of my school study I joined a college namely "Government College Civil lines Lahore" there some of my classmate tried to force me to convert to Islam. I denied them, so we had some difficult conversations -  so after that I decided to join the seminary to learn about my faith and to teach others about my faith. As I was answer-less in front of my college classmates - so I hoped by learning about my faith and teaching it, others may not be in such situation after me. So, on the 3rd of September 2006 I joined the St. Mary's Seminary 30 Mason Road Lahore

From there, I succeeded and completed metric from the City District Govt High School Shahdara Lahore in 2005.

I graduated in Philosophical studies from St. Francis Xavier Seminary Youhanabad Lahore in 2012.

I started my pastoral work in St. Joseph Catholic Church in Gujranwala on 25 July 2016.

Afterword I was transfer to St. Roque's Catholic Church Pasrur I reached there on 21 Nov, 2016. There God blessed me with the ministry of Deacon on 3rd of June 2017.

(in between 27th March 2017 to 5th May I stayed in St. Francis Xavier Parish Gujranwala. with Fr. Ashraf Gill)

God Blessed me on 12th of June to work as a Deacon in St. Joseph and Mary's Parish in Mariamabad the National Marian Shrine in Mariamabad.

God gave me grace and I was Ordained as a priest on 7th September 2017 at Sacred Heart Cathedral Archdiocese of Lahore.

I have worked in Sts. Mary and Joseph Parish Mariamabad as deacon form Jun 2017 to September 2017

7th September 2017 to November 2017 as Assistant Parish Priest on the same place.

I was appointed as assistant to assistant in Francis Xavier Parish Gujranwala in November 2017 to January 2018.

I was appointed as an Acting Parish Priest in St. Roque's Catholic Church Pasrur 3rd January 2018 to 23rd February 2018.

Below Fr. Faisal shares his busy schedule in life as a priest - Please keep him in your prayers!
My Sunday activities

4:00 am Rising and getting ready

4:30 am I leave my parish house for Holy Mass

5- any other prayer if someone asks me.