Archbishop Nelson Perez Installed as Archbishop of Philadelphia replacing Chaput with over 1,000 in attendance - Full Video 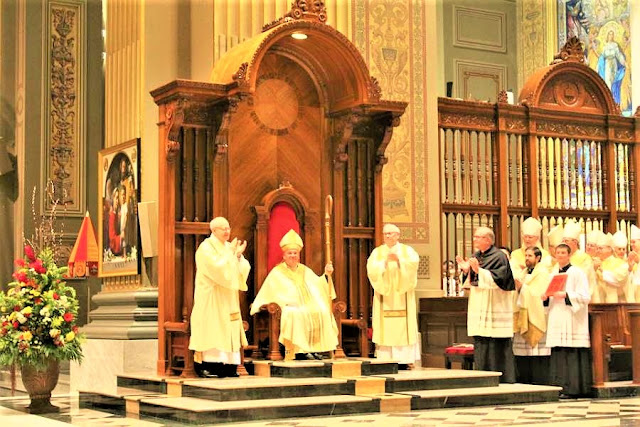 Diocese of Cleveland Release:
Archbishop Perez says a fond farewell to Cleveland during his installation as Philadelphia’s archbishop
News of the Diocese  February 18, 2020

“I can’t do this alone. It’s not about me,” Archbishop Nelson Perez said during the homily of his installation Mass as archbishop of the Archdiocese of Philadelphia, Pennsylvania.

He said many people helped him to get where he is today, including his family and those he worked with in the archdiocese, the Diocese of Rockville Centre, New York, where he served five years as an auxiliary bishop, and the Catholic Diocese of Cleveland where he was bishop for the past 2½ years.

“I want to give a special shout-out to the people of Cleveland who welcomed me so warmly. It was two years of utter joy. I was so incredibly blessed to me in Cleveland,” he said, recalling how surprised he was to learn he would be returning to Philadelphia, where he had been ordained to the priesthood and served more than 20 years as a priest, pastor and in other roles for the archdiocese.

“I will always have a special place in my heart for the people of Cleveland,” he said. “And, as I’ve often said, Cleveland rocks!”

The installation liturgy took place on Feb. 18 at the Cathedral Basilica of SS. Peter and Paul and the Shrine of St. Katharine Drexel. The new archbishop was ordained a priest in 1989 in the same cathedral where he was installed as archbishop. He was ordained as an auxiliary bishop for the Diocese of Rockville Centre in 2012 and in July 2017, he was named as the 11th bishop of the Catholic Diocese of Cleveland.

An overflow crowd of about 1,500 people filled the cathedral church and hundreds more watched the Mass on screens in the adjacent chapel.

About 50 bishops and archbishops were in attendance including Archbishop Christophe Pierre, the papal nuncio; Cardinal Justin Rigali, a Philadelphia archbishop emeritus; Bishop emeritus Martin Amos, retired bishop of Davenport, Iowa and a Cleveland native; Toledo Bishop Daniel Thomas, former apostolic administrator of the Cleveland Diocese and a native Philadelphian; and Columbus Bishop Robert Brennan, who served with Archbishop Perez as an auxiliary bishop in the Diocese of Rockville Centre.

A contingent of priests from Cleveland, including Father Don Oleksiak, vicar general; Father Gary Yanus, judicial vicar; Father Dan Schlegel, vicar for clergy and religious; Father Mark Latcovich, president-rector of Borromeo and Saint Mary seminaries; Father Bill Thaden, pastor of Sacred Heart Chapel in Lorain; Father Steve Vellenga, director of the diocesan Society for the Propagation of the Faith/mission office and pastor of St. Mary Parish in Painesville; and Benedictine Abbot Gary Hoover, were among hundreds of concelebrants at the Mass.

After processing into the cathedral, Archbishop Perez sat near the ambo while Archbishop Pierre offered thanks to retiring Archbishop Charles Chaput. “You deserve a little rest,” he told him.

Archbishop Chaput led the archdiocese for nearly nine years before submitting his resignation letter – as required by Church law -- to Pope Francis on Sept. 26, 2019, his 75th birthday. The pope accepted his resignation last month and announced the appointment of Archbishop Perez as his successor on Jan. 23.

“Your smile comes from within. We’ve learned from you what it is to smile,” Archbishop Pierre said. “Yours is not an easy task but the people of Philadelphia will support you with their prayers.”

The nuncio then read the English translation of the papal bull appointing Archbishop Perez as the 14th bishop and 10th archbishop of Philadelphia and invited the new archbishop to show the document to the archdiocesan College of Consultors, the other priests, bishops and the congregation. After that, Archbishop Chaput escorted him to the cathedra, officially making him the archdiocese’s new archbishop.

In his homily, Archbishop Perez credited his predecessor for leading the archdiocese through some difficult times, calling him steadfast. “I owe him much gratitude,” he said, as the congregation applauded.

Addressing the assembled priests and seminarians, the new archbishop offered some advice: “If the nuncio calls and asks if you’re alone, watch out,” he quipped, referring to the calls informing him of his episcopal appointments.

The archbishop also offered special thanks to city officials, including the safety forces and Philadelphia’s new police commissioner, Catholic TV from Boston and Catholic Faith Network from Rockville Centre, both of which carried a live feed of the installation Mass, and the rest of the media. “You provide an incredible service to society,” he said.

He also had kind words for the archdiocesan staff who scrambled to organize and implement the installation in 3½ weeks. “It’s amazing what they did.”

He chose “Jesus, Hope of the World” as the theme for the installation celebration. After reading a definition of hope, he described it as a gift from God, pointing out hope is all around us – it’s at the core of our Christian faith. Archbishop Perez shared the story of a man who asked him during an event at the Cleveland Clinic if – given all going on in the world – he has hope.

“I told him yes, I did. I gave my life to a faith that believes a dead man came back to life so yes, I have hope,” he said.

Archbishop Perez also offered his apology for people who were deeply hurt by the clergy abuse scandal, offering his hope for healing.

Hope is a steadfast faith that all things work for the good of God, he said, and the source of that hope is in Christ who is present in us through his word. “He is food for our journey. He’s waiting for us with open arms,” the archbishop said, appealing to those who have fallen away from the Church. “It’s time to come back to church,” he said.

The archbishop also talked about Pope Francis’ view of the Church as a community of missionary disciples, something he also embraces.

He asked the congregation to learn and repeat a phrase he often uses at confirmations: “Never underestimate the power of the spirit of God working in you, through you and despite you. Take the initiative and move forward, Go out and seek the fallen away outcasts,” he said.

After Mass, the new archbishop spent time greeting and taking photos with hundreds of people before heading to a private reception.

“I’ll be at work tomorrow morning,” he promised. Full Text Release by the Diocese of Cleveland
Posted by Jesus Caritas Est at 10:32 AM