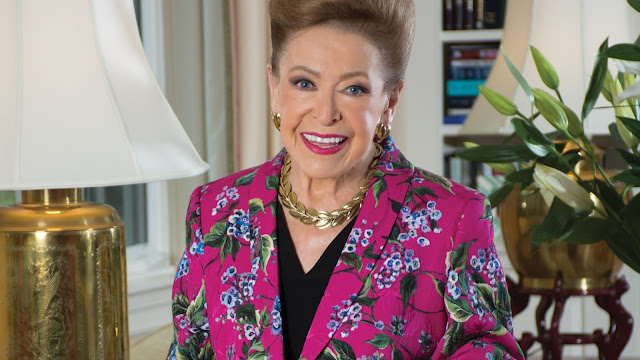 In an interview with Catholic News Service she explained,
“I’m a writer who happens to be Catholic,” she said. “It’s no surprise that the Catholic faith, which has played a large role in my life, will be a key influence on my characters.”
According to Fordham, she was active in Catholic affairs, Higgins Clark was made a Dame of the Order of St. Gregory the Great, a papal honor. She is also a Dame of Malta and a Lady of the Holy Sepulcher of Jerusalem. She received the Catholic Big Sisters Distinguished Service Award in 1998 and the Graymoor Award from the Franciscan Friars in 1999. Honors she has received include the Gold Medal of Honor from the American-Irish Historical Society (1993), the Bronx Legend Award (1999), the 2001 Ellis Island Medal of Honor, the Passionist’s Ethics in Literature Award (2002), the first Reader’s Digest Author of the Year Award (2002), and the International Mystery Writers’ “First Lady of Mystery” Award (2008). She is an active advocate and participant in literacy programs.
FULL TEXT STATEMENT by Publishers:

January 31, 2020 - Carolyn K. Reidy -  President & CEO - Simon & Schuster, Inc.
It is with great sadness that I write to inform you that Mary Higgins Clark died earlier today in Naples, Florida, at the age of 92, from natural causes while surrounded by loving family and friends.
It is impossible to overestimate the importance of Mary’s contribution to our success, and her role in the modern history of Simon & Schuster. Beginning in 1975 with the publication of WHERE ARE THE CHILDREN, each of her  56 books has been a bestseller. There are more than 100 million copies of her books in print in the United States; they are international bestsellers and have been translated into every major and many less well-known languages.
But these storied publishing accomplishments tell only a small part of the larger story that is Mary Higgins Clark. She was, simply, a remarkable woman who overcame an early life of hardship and challenges, never doubting her ability as a natural-born storyteller (and she was one for the ages), and who persevered through trial and rejection until she at last achieved her Holy Grail of being a published author.
Those of us who are fortunate to have worked with Mary—and at Simon & Schuster, that is multitudes—know her as a person of tremendous loyalty and dedication: In this day and age it is exceedingly rare for an author, especially one as prized as Mary, to remain with a single publisher for an entire forty-five-year career.
She was similiarly devoted to her readers, until very recently going out of her way to meet them while on tour for every one of her books, and drawing tremendous energy and satisfaction from her interactions with them, even though she long ago could have pulled back from that part of being an author. She was, too, a generous member of the literary community, especially toward new authors, and was well known beyond the publishing world  for her support of innumerable philanthropic and civic causes.
Of course, no one here has been associated with Mary longer than Michael Korda, Editor-in-Chief Emeritus of Simon & Schuster, who says:
“Mary and I have been dear friends, and worked together since 1975, during which time we never had a cross word between us, which surely sets something of a record for author-editor relationships.
“She was unique. Nobody ever bonded more completely with her readers than Mary did; she understood them as if they were members of her own family. She was always absolutely sure of what they wanted to read—and, perhaps more important, what they didn’t want to read—and yet she managed to surprise them with every book. She was the Queen of Suspense, it wasn’t just a phrase; she always set out to end each chapter on a note of suspense, so you just had to keep reading. It was at once a gift, but also the result of hard work, because nobody worked harder than Mary did on her books to deliver for her readers. She was also, unfailingly, cheerful under pressure, generous, good humored and warm-hearted, the least ‘temperamental’ of bestselling authors, and the most fun to be around. I feel privileged to have enjoyed forty-five years of her friendship, and saddened that I will no longer be able to pick up the phone and hear her say, ‘Michael, I think I’ve figured out how to make this story work.’ She was a joy to work with, and to know.”
Yes, she was deservedly known as the Queen of Suspense, but in our building we have long and fondly thought of her as the First Lady of Simon & Schuster. Today we did not just lose an author, but a true and well-loved member of the Simon & Schuster family. I will miss her tremendously, both on a personal and professional level, but we all can be grateful and proud for having had the privilege of being her publisher these many years, and thankful for all she has meant to her millions of readers and for her kindness and service to many generations of authors.
Please join me in offering heartfelt condolences to Mary’s children and extended family.
Source: https://about.simonandschuster.biz/news/mhc-ckr/