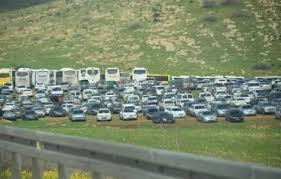 ASIA/HOLY LAND - "Demonstrative" protest of thousands of Israeli settlers on the lands of the Latin Patriarchate. Silence on behalf of the political authorities
Monday, 24 February 2020
Jerusalem (Agenzia Fides) - On Friday, February 21, 2020, thousands of Israeli settlers entered with no permission and gathered on the land lot belonging to the Latin Patriarchate in Tayasir, near Tubas in northern West Bank, in clear violation of private property. The mass of Israeli settlers arrived aboard dozens of buses and cars (see photo) and it should be mentioned that settlers brought their cows, some days ago, to the Patriarchate lands and caused considerable damage there. The mass of Israeli settlers arrived aboard dozens of buses and cars (see photo). The Latin Patriarchate of Jerusalem is very concerned not only from the settlers’ violations of its properties, but also from the lack of action by the Israeli authorities to put an end to such offenses.
The intimidating acts perpetrated by groups of settlers should also be read in light of the recent unilateral choices made by the US Administration regarding the present and future fate of the Palestinian lands occupied by Israel. The "solution" project of the Israeli-Palestinian conflict launched by the US on January 28, defined by President Donald Trump as "the plan of the century", gave Israel the possibility to extend sovereignty to settler settlements scattered in the West Bank, but at the same time asked Israel to freeze the construction of new settlements in the Arab territories for four years. A few days ago, Israeli Prime Minister Benjamin Netanyahu announced that over 5,000 new homes for Israeli settlers will be built in key areas of East Jerusalem, in the neighborhoods of Har Homa and Givat Hamatos. Both neighborhoods are located in the last lands that connect the Palestinian areas of the West Bank to East Jerusalem. (GV) (Agenzia Fides, 24/2/2020)
Posted by Jesus Caritas Est at 11:42 AM