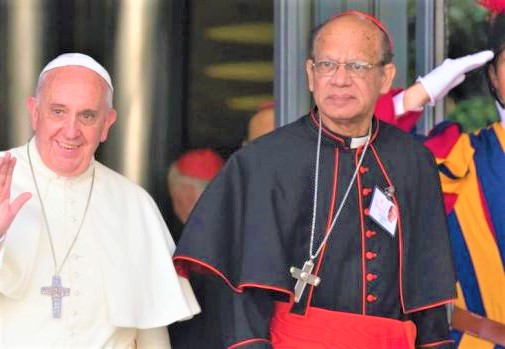 Indian Catholic Church re-elects Card Gracias as president, Mgr Machado as secretary general
by Nirmala Carvalho
The Plenary Assembly of the Catholic Bishops' Conference of India ends tomorrow in Bengaluru. “I am at the service of God and the Church,” said Archbishop of Vasai. Dialogue is the "way chosen by God to reveal himself to us".

Yesterday it re-elected Card Oswald Gracias, archbishop of Mumbai, as its president, as well as elected Archbishop Felix Machado of Vasai as its secretary general.

Archbishop Machado, who heads the Office for Ecumenism and Interreligious Affairs of the Federation of Asian Bishops' Conferences (FABC), told AsiaNews that he is “at the service of God and the Church. Only doing God’s will gives meaning to my life.”

Between 1999 and 2008, he served as undersecretary of the Pontifical Council for Interreligious Dialogue in the Vatican. He studied philosophy at the University of Lyon and spent seven years at the Taizé community in France. During that time, he also served for a year in Bangladesh as a volunteer in refugee camps, later earning a Theology degree from Maryknoll College in New York and a doctorate from Fordham.

Speaking about his election, he said that India’s bishops “unanimously pointed to me as ‘a man of dialogue’, and this is a great honour for me from fellow bishops.” Indeed, “God reveals himself through us and the method of dialogue. God never imposes anything upon us; he enters into the dialogue of salvation with us.

“The Church of India wants to trod the path of dialogue all the way and arrive at truth and charity,” noted the new CBCI secretary general. She “has always faced challenges and situations, but we must be faithful to Christ and keep on the path of dialogue. Dialogue means loving people.

“Truth has to be respected, always done in charity, fearlessly proclaimed, but always in charity. This is the dictum of the Church.”

Noting that the assembly’s theme is ‘Dialogue: the way to truth and charity, he explained that “The bishops want me to take up this challenge, together with the leadership, and assist Cardinal Gracias. “

To this end, “We must necessarily follow the path of dialogue. Confrontation, compromise or even political negotiations are not Christian. Dialogue is the sacred path, the path chosen by God to reveal himself to us, and God continues to dialogue with us.”
Full Text Release of AsiaNews.it - Cardinal Gracias speech starts at 13:00 below:
Posted by Jesus Caritas Est at 7:29 PM