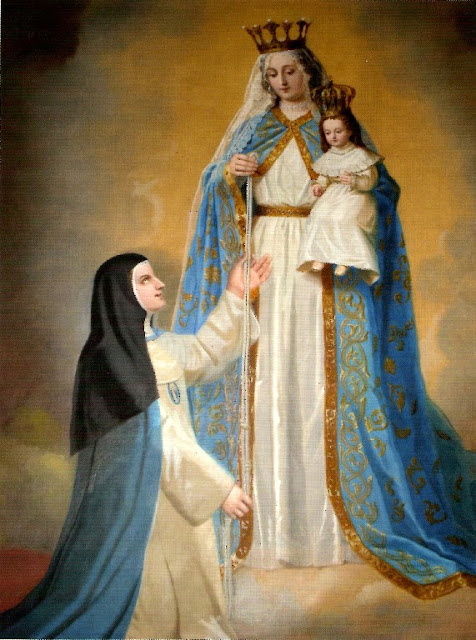 Our Lady of Good Success Date: very early 17th c., first approved 1611 Place: Quito, Ecuador Visionary: Venerable Mother Mariana de Jesus Torres The story of Our Lady of Good Success is a most fascinating one -- and incredibly important and timely, as many of the prophecies of our Lady and our Lord given to Mariana pertain explicitly to the 20th c. and thereafter. Mother Mariana was a Spanish Conceptionist nun, blessed with the charismata of discernment and prophecy, who ran a convent in Quito, Ecuador. First, Our Lady told her to make a life-sized statue of her holding the Infant Jesus under the title "Our Lady of Good Success." The statue was begun by a local sculptor, but was miraculously completed in 1611 by the Archangels. Our Lady told her that at the end of the 19th Century and especially in the 20th Century, Satan would reign almost completely by the means of the Masonic sect. She told Mother Mariana that this battle would reach its most acute stage because of various unfaithful religious, who, "under the appearance of virtue and bad-spirited zeal, would turn upon Religion, who nourished them at her breast."

SEE ALSO: Novena to Our Lady of Good Success - Miracle Prayers to Share!  https://www.catholicnewsworld.com/2019/02/novena-to-our-lady-of-good-success.html
"During this time, insomuch as this poor country will lack the Christian spirit, the Sacrament of Extreme Unction will be little esteemed. Many people will die without receiving it - either because of the negligence of their families or their false sentimentality that tries to protect the sick from seeing the gravity of their situations, or because they will rebel against the spirit of the Catholic Church, impelled by the malice of the devil. Thus many souls will be deprived of innumerable graces, consolations and the strength they need to make that great leap from time to eternity..." "As for the Sacrament of Matrimony, which symbolizes the union of Christ with His Church, it will be attacked and profaned in the fullest sense of the word. Masonry, which will then be in power, will enact iniquitous laws with the objective of doing away with this Sacrament, making it easy for everyone to live in sin, encouraging the procreation of illegitimate children born without the blessing of the Church. The Christian spirit will rapidly decay, extinguishing the precious light of Faith until if reaches the point that there will be an almost total and general corruption of customs. The effects of secular education will increase, which will be one reason for the lack of priestly and religious vocations..." "The Sacred Sacrament of Holy Orders will be ridiculed, oppressed and despised. ...The demon will try to persecute the Ministers of the Lord in every possible way and he will labor with cruel and subtle astuteness to deviate them from the spirit of their vocation, corrupting many of them. These corrupted priests, who will scandalize the Christian people, will incite the hatred of the bad Christians and the enemies of the Roman, Catholic and Apostolic Church to fall upon all priests. This apparent triumph of Satan will bring enormous sufferings to the good Pastors of the Church...." "Moreover, in these unhappy times, there will be unbridled luxury which, acting thus to snare the rest into sin, will conquer innumerable frivolous souls who will be lost. Innocence will almost no longer be found in children, nor modesty in women, and in this supreme moment of need of the Church, those who should speak will fall silent." "But know, beloved daughter, that when your name is made known in the 20th century, there will be many who will not believe, claiming that this devotion is not pleasing to God...A simple humble faith in the truth of My apparitions to you, My predilect child, will be reserved for humble and fervent souls docile to the inspirations of grace, for Our Heavenly Father communicates His secrets to the simple of heart, and not to those whose hearts are inflated with pride, pretending to know what they do not, or self-satisfied with empty knowledge..." Our Lady said, "...the secular Clergy will leave much to be desired because priests will become careless in their sacred duties. Lacking the divine compass, they will stray from the road traced by God for the priestly ministry, and they will become attached to wealth and riches, which they will unduly strive to obtain. How the Church will suffer during this dark night! Lacking a Prelate and Father to guide them with paternal love, gentleness, strength, wisdom and prudence, many priests will lose their spirit, placing their souls in great danger. This will mark the arrival of My hour." "Therefore, clamor insistently without tiring and weep with bitter tears in the privacy of your heart, imploring our Celestial Father that, for love of the Eucharistic Heart of my Most Holy Son and His Precious Blood shed with such generosity and the profound bitterness and sufferings of His cruel Passion and Death, He might take pity on His ministers and bring to an end those Ominous times, sending to this Church the Prelate who will restore the spirit of its priests." She predicted a truly Catholic president of Ecuador who would dedicate that country to the Sacred Heart and who would be assassinated by Masons (this happened during the presidency of Gabriel Garcia Moreno, 1821-1875. Read more here). She predicted that the Immaculate Conception and Papal Infallibility would be strictly defined and declared dogma (these happened in 1854 and 1870, respectively). The Infant Jesus part of the statue isn't original: a Conceptionist sister hid the original statue during a revolution and died before revealing where she'd secreted it. Our Lady told Mother Mariana that the original statue would be found after the restoration of the Church had begun. Mother Mariana predicted the day and exact hour of her death (she died at 3:00 P.M. on January 16, 1635). After death, her body remained flexible and lovely. A blind girl was cured at Mother's wake when a flower that encircled Mother's head was touched to her eyes. In 1906, Mother Mariana's casket was opened and her body was found to be incorrupt, exuding the fragrance of lilies. One may view it by visiting the convent in Quito. (Edited from FishEaters)