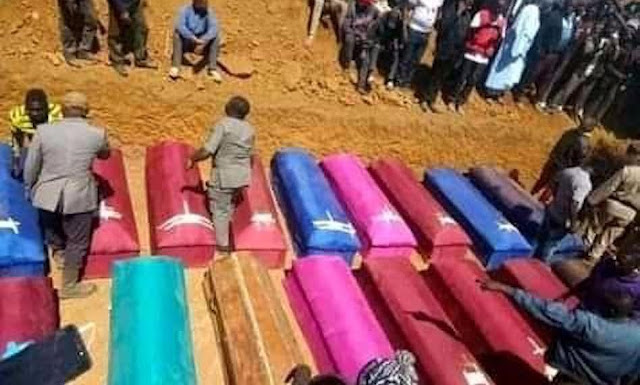 At least 32 people were killed and a pastor’s house and church building were burned down in two nights of attacks this week by Muslim Fulani herdsmen in Plateau state, Nigeria, in January 2020.

The Church of Christ in Nations (COCIN) building and home were destroyed in an attack on predominantly Christian Marish village on Monday evening (Jan. 27), one of three communities in Bokkos County hit in armed assaults that began the previous evening, area residents said. The attacks were the latest bloodshed in an escalation of violence in Plateau state, where herdsmen killed Christians in Riyom and Mangu counties earlier this month.

“The attacks took place between the hours of 7 p.m. and 4 a.m. on Kwatas on Sunday, and also on Monday within the same time frame on Ruboi and Marish by the herdsmen,” Alam said.

“A pregnant woman and 16 others have been killed,” Mancha said.

Benjamin Dogo of Kwatas informed Morning Star News in a text message, “Our people have been killed again. About 15 of the dead have been evacuated to the mortuary along with many others that sustained injuries during the attack on Sunday night.”

State police said 13 persons were killed and five injured in the attack on Kwatas. Police spokesman Ubah Gabriel Ogaba on Monday confirmed the attack by “unknown gunmen” on Kwatas in a press statement.

Ruboi and Marish were attacked after police issued the statement, and officers have provided no details on those attacks.

Plateau Gov. Simon Lalong condemned the attacks on the Christian communities in a statement through press spokesman Makut Macham.

“My heart again bleeds by this tragedy as lives of innocent citizens are cut short for no reason,” reads the statement issued on Monday. “Security agencies must go after those who are behind these attacks and their sponsors so they can face the law and be taught a lesson.”

Sen. Istifanus Gyang, deputy chairman of the Nigerian Senate Committee on Defense, said attacks on the Christian communities raise questions on the readiness of security agencies to protect people against herdsmen onslaughts.

“Only last week, Kombun village in Mangu LGA was attacked and now, it is Kwatas, Marish, and Ruboi villages in neighboring Bokkos LGA,” he said.

Nigeria ranked 12th on Open Doors’ 2020 World Watch List of countries where Christians suffer the most persecution but second in the number of Christians killed for their faith, behind Pakistan.


If you or your organization would like to help enable Morning Star News to continue raising awareness of persecuted Christians worldwide with original-content reporting, please consider collaborating at https://morningstarnews.org/donate/

Edited from: Morning Star News Nigeria
Posted by Jesus Caritas Est at 9:11 AM