Pope Francis offers Remedy for Hardness of Heart : "I was hungry, you gave me to eat; I was in prison, you came to visit me; I was suffering and you consoled me....this is compassion.." 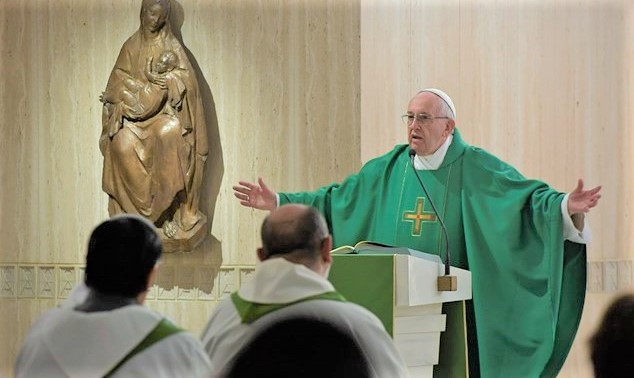 Pope at Mass: God asks of us an open heart full of compassion
VaticanNews Report: "The medicine against hardheartedness is memory," says Pope Francis in his homily at Mass Tuesday morning at Casa Santa Marta in the Vatican. He invites Christians not to forget the grace of salvation that makes the heart sincere and capable of mercy.
By Robin Gomes

In his homily, Pope Francis reflected on the day’s Gospel from St. Mark where the disciples are worried about the shortage of bread in the boat where there was also Jesus.  The Pope pointed out that the concern for a material good had got the better of them.  Jesus rebukes them that their hearts are hardened and they cannot understand.  “Have you eyes and cannot see, have you ears and cannot hear?” he asks them, reminding them of the multiplication of five loaves to feed five thousand, with many baskets full of fragments left over.

Compassion is what the Lord wants in us, the Pope said, adding: "Mercy I want, not sacrifice." The Holy Father said that a heart without compassion is an idolatrous heart. A self-sufficient heart goes ahead sustained by its own selfishness, becoming strong only with ideologies.

Speaking about the four ideological groups of Jesus’ time – the Pharisees, the Sadducees, the Essenes and the Zealots – the Pope said they had hardened their hearts to carry out a project that was not God's, as there was no place for compassion.

Jesus is a slap to hardheartedness
However, against this hardheartedness, the Pope said, there is a "medicine", and it is memory. This is why, the Pope said, in today’s Gospel and in many other Scripture passages, there echoes the need for the salvific power of memory, a "grace" to be asked for because it "keeps the heart open and faithful".

“When the heart hardens,” the Pope said, “one forgets” the grace of salvation and of gratuitousness. A hardened heart leads to quarrels, to wars, to selfishness and the destruction of the brother and sister because there is no compassion.  The Pope said that the greatest message of salvation is that God has had compassion on us.  And the Gospel often repeats that Jesus had compassion on seeing a person or a painful situation. “Jesus is the compassion of the Father,” the Pope said. “Jesus is the slap to every hardness of heart.”

An open heart
Pope Francis thus underscored the need for asking for the grace of having a heart that is not hardened and full of ideologies, but “open and compassionate” in the face of what is happening in the world.  It is on this, he said, that we will be judged at the Last Judgement, and not by our "ideas" or our "ideologies".

"I was hungry, you gave me to eat; I was in prison, you came to visit me; I was suffering and you consoled me", the Pope said is what is written in the Gospel and “this is compassion, this is not hardness of heart".  And humility, the memory of our roots and our salvation, the Pope said, will help us to keep it that way.

Every one of us, Pope Francis pointed out, has something that has hardened within our hearts.  “Let us remember and let it be the Lord who gives us a righteous and sincere heart where the Lord dwells.”  “The Lord cannot enter hardened and ideological hearts.  He enters hearts that are like His heart: open and compassionate,” the Pope said.
Full Text Source: VaticanNews.va
Posted by Jesus Caritas Est at 12:25 PM