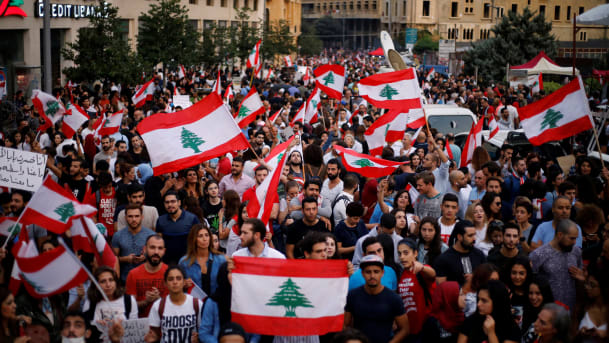 Beirut, Archbishop among protesters: politics is service, restore hope or resign
Harsh attack on the ruling class of Msgr. Boulos Abdel Sater, who calls for a "dignified life" for the country, on givernment to work "day and night" to improve people's lives. Those who encourage "intolerance and divisions" are targeted. Yesterday, Parliament voted to trust the Diab government, 370 people were injured in the street clashes.

Beirut (AsiaNews) - "Service" is the ultimate "purpose" of "power". Today the Lebanese "are tired of the controversy" and are "worried about their children's future". This requires initiatives to restore "hope".

This is a heartfelt appeal that was launched during the homily of the mass by Msgr. Boulos Abdel Sater, Maronite Archbishop of Beirut, who lashes out at a ruling class that has been unable to respond to the needs of the population for months and expresses support for the protest. It is necessary to "ensure a dignified life", adds the prelate, otherwise "it is better to resign".

The archbishop's words come at a time of profound change for the country, which could mark a turning point since the resignation of the then Prime Minister Saad Hariri.  Yesterday, Parliament granted confidence to the new executive led by Prime Minister Hassan Diab, with 63 votes in favor (out of 84 in total), 20 against and an abstention. However, this was not enough to calm protests, where there were new clashes between citizens and security forces that caused 370 injuries.

In a context of deep tension and confusion, the ruling class receieved criticism from another exponent of the Maronite Church and came on the very feast of San Marone. The function was also attended by the head of state Michel Aoun, the President of Parliament Nabih Berry (the only one to have openly applauded some passages of the homily) and the new Prime Minister Diab.

The "tens of thousands" of Lebanese who "elected you", underlined Msgr. Boulos Abdel Sater, expect you to "improve" your lifestyle, economy and finances and to "work day and night" to ensure people "have a dignified and decent life". If you are not able, he adds, "it is more honorable to resign" while criticizing "those who encourage intolerance and divisions and consider the country as their property".

Having taken office in the past few months, the prelate immediately distinguished himself for some unprecedented stances such as the need to welcome (also) poor students in a prestigious Catholic high schools, above all those who had not been admitted due to lack of financial means. A few weeks later he decided to renounce the Mercedes owned by the archbishopric, used by his predecessor, preferring his private vehicle with a style reminiscent of the pontificate of Pope Francis.

From the first days of the protest, in October, Msgr. Boulos Abdel Sater expressed solidarity with the demonstrators and popular movement. The homily of the past few days, some commentators point out, has also impressed a "political note" on the social commitment of the prelate which took place "with the approval" of the top leaders of the Lebanese Maronite Church. "In Bkerké - an expert comments - there has recently been an awareness, that it is time to remedy the mistakes made and that now a prophetic voice is needed".

For several months, anti-government protesters considered the local Catholic leadership to be a hostile force, close to the ruling class despite the numerous positions taken by Card. Beshara Raï in solidarity with the protest. The words of the archbishop of Beirut created a new bond between the citizens in the square and the ecclesiastics, who for some time had closed the doors of the churches to avoid getting involved in the clashes. "They banned protesters from accessing churches in the past - a user writes on social media - but found that one of them [referring to the archbishop of Beirut ]- was already inside."
Full Text Source: AsiaNews.IT
Posted by Jesus Caritas Est at 3:11 PM