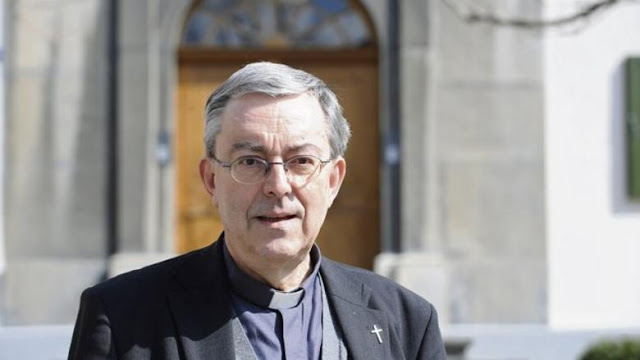 Christoph Casetti died early Sunday morning after a short illness, according to the Chur diocese. Casetti has worked for the diocese of Chur since 1982, most recently as bishop vicar for the proclamation of faith and catechesis, as a member of the bishop's council and as resident canon and cathedral rehearsal of the Chur cathedral chapter, which is responsible for the election of the Chur bishop.

Casetti was also spokesman for the bishop for 22 years, until Giuseppe Gracia replaced him in this role at the end of 2010.  Casetti was famous as an exorcist; In 2008 he took part in a discussion in the “Club” of Swiss television on the subject of “exorcism”.

Bishop Vicar, Vicar General, Diocesan Judge
The Zurich native studied philosophy in Rome and Paris and theology in Münster, where he received his doctorate in 1973. After his ordination in 1974, he initially worked as a vicar in Zurich, until he was appointed bishop vicar to Chur in 1982 by the then bishop Johannes Vonderach.

In 1990 Bishop Wolfgang Haas Casetti appointed vicar general for the canton of Zurich. He held this office until 1993. Since that year, Casetti has also served as diocesan judge for the diocese of Chur.

Decision-making authority over the St. Luzi seminary
Since 2002 Casetti has been a member of the International Council for Catechesis of the Congregation for the Clergy. In 2009, Bishop Vitus Huonder appointed him bishop vicar for the proclamation of faith and catechesis. In the same year, Christoph Casetti received from Pope Benedict XVI. the title Monsignor (Chaplain of His Holiness).

In April 2014, Casetti received full decision-making authority for the St. Luzi Seminary without being rainy. He got this job after Auxiliary Bishop Marian Eleganti gave up the office of rain due to tensions with Huonder.

Commemorative for the 75th birthday
In 2018, on the occasion of Christoph Casetti's 75th birthday, a commemorative publication entitled "A life for life" was published by Helmut Prader and Elisabeth Strengele. The anniversary's curriculum vitae states that Casetti's “family catechism” has been translated into various, especially Eastern European languages. Casetti was therefore a co-founder and active member of the interest group for natural family planning Switzerland / Principality of Liechtenstein. He was also a spiritual advisor to the Association of Catholic Doctors in Switzerland.

Despite many administrative tasks, Casetti “always remained a pastor with a real priestly heart,” wrote the then Bishop of Chur, Vitus Huonder, in his preface to the commemorative publication. Huonder admired Casetti's «equanimity with whom he viewed and lived through the upheavals. He bowed or was bowed, but he never broke. »(Sys)
Source: Kath.ch
Posted by Jesus Caritas Est at 10:35 AM