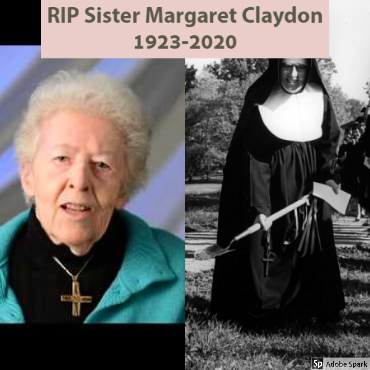 Sr. Margaret Claydon, SNDdeN, ’45
President of Trinity: 1959 to 1975
With heavy hearts Trinity shares the sad news that President Emerita Sr. Margaret Claydon, SNDdeN, Class of 1945, passed away on February 1, 2020, at Mount Notre Dame in Cincinnati. She was peaceful in her final days and surrounded by the love and care of the Sisters of Notre Dame de Namur, her family and devoted Trinity alumnae in Cincinnati.

The Claydon family, the Trinity Community and the Sisters of Notre Dame de Namur will gather together on Saturday, February 8, 2020, to celebrate the life and legacy of Sr. Margaret Claydon with a Mass in Notre Dame Chapel at 10:00 a.m. followed by a luncheon. Please help us plan by completing the RSVP form.

Leading an institution of higher education through the tumultuous decade of the 1960’s was no small task for any college president.  But beyond the universal problems of managing the campus during an historic era of social change amid war protests and the movements for civil rights and women’s rights, Margaret Claydon, SNDdeN, had an additional challenge when she took the helm at Trinity College in Washington, D.C. in 1959:  she had to figure out how to keep a traditional small Catholic women’s college relevant and thriving in a world increasingly favoring large coeducational universities.  During her tenure as Trinity’s president from 1959 to 1975, “Sister Margaret” as she was known to generations of students and alumnae led a series of remarkable changes that modernized the college and laid the foundation for the institution known today as Trinity Washington University.

Only 36 years old when she took office, Sr. Margaret was one of the youngest college presidents in America.  Displaying the modern vibe that characterized so much of her career, she immediately called a press conference to announce her plans for promoting women’s education at Trinity.  As Time magazine reported (“Sisterly Advice,” November 2, 1959), Sr. Margaret declared the need for more women to exert public intellectual leadership, saying that, “We’re not in the business of training committee women or bridge players.”

Tributes are already pouring in from alumnae who remember Sister Margaret:

Speaker of the House Nancy Pelosi ’62 said, in a statement on her website:  “Sister Margaret Claydon was an exemplar of the ideal Trinity Woman: a leader of penetrating intellect, firm faith and inquiring mind, whose keen sense of purpose and courage to question the status quo was an inspiration to all who walked through our school’s halls.  For the women in my class and me, Sister Margaret – with her youth, sophistication and success – was a symbol of strength and empowerment, whose leadership was a reminder that women could become not only a Secretary or Treasurer, but a President – or the Speaker of the House.”

Former Secretary of Health and Human Services Kathleen Sebelius ’70 writes: “Sister Margaret was an intellectual and elegant leader who believed that women should be “engaged, involved” and “make a better contribution to American life” … She challenged Trinity students to both learn facts and have opinions, to think for ourselves, a view not widely supported at the time. We were blessed to have Sister Margaret as a great role model and leader at Trinity College.”

Director of Education at the Folger Shakespeare Library Peggy O’Brien ’69 writes: “The impact of her unwavering vision and high expectations has been and will continue to be immense–on me and on thousands of Trinity alums everywhere.”

Firm in her commitment to the central importance of the liberal arts, Sr. Margaret led revitalization and modernization of Trinity’s curricula and pedagogy, adding graduate degrees for teachers and pastoral ministers in the Washington region, and opening the undergraduate program to older women seeking to complete degrees.  Her crowning academic achievement was securing a chapter of the prestigious Phi Beta Kappa honor society for Trinity, only the second Catholic women’s college in the country to do so.

The controversies of the 1960’s were never far from Sr. Margaret’s thoughts.  In a 1965 speech “Inheriting a Revolution” she spelled out the whole point of a liberal arts education:  “We have to be willing to acquaint our students with controversy and problematic knowledge.  The emphasis cannot be only on the assemblage and mastery of facts, but must be on how to make sense of them in relation to the whole human condition. We have to encourage our students of today to take stands that may be unpopular, that may even expose them to ostracism, debate, controversy.”  And she went on, in a passage that echoes loudly in 2018, “One of the basic rights of free people is to be informed truthfully about public events.  Our students must be taught from the very beginning that this right is theirs, that they have a duty to seek the facts, the right to investigate truth freely.”

The 1960’s were also a period of dramatic change in the Roman Catholic Church as a result of the Second Vatican Council which fostered changes in liturgy, religious life and the Church’s engagement with the world.  Beyond superficial changes in liturgical language and religious clothing, Vatican II also gave rise to change in the governance of Catholic higher education.

With national stature as the first woman president of the college and university department of the National Catholic Education Association, in 1966 Sr. Margaret gave a bold speech at the NCEA meeting calling for substantial change in the governance of Catholic colleges and universities, saying that Catholic colleges “must have autonomy in academic affairs and decisions,” a major change in structure from religiously-controlled governance.  She went on,  “The only criterion for appointment or election to the Board should be competence in a special area … there should be no stipulation regarding status as religious or laity but simply the securing of the best possible leadership available.”  Putting her words into practice, Sr. Margaret led the transformation of Trinity’s board of trustees from all religious to a majority of lay trustees.

Her national stature led to her election as the only female delegate in a convening of Catholic college presidents at the Vatican in 1972.  Years later she could still remember the barriers she faced as the only woman at that meeting:  “I kept raising my hand and wanting to speak, but they wouldn’t call on me,” she said with a wry laugh that was pointed even decades later.  The men were ignoring her.  She confided her frustration to her friend Father Theodore Hesburgh, president of the University of Notre Dame.  He came up with a plan:  “He made a point of taking me to lunch.  We walked out of the Vatican at the spot where all the men were getting into their big limousines, and he made a point of introducing me to each of them, and then we walked on together and they saw us talking.  After that, they called on me regularly.”

Under Sr. Margaret’s leadership, Trinity experienced dramatic growth in the size of the student body through the 1960’s.  She expanded integration and diversification of the student body, securing a Carnegie Corporation grant in 1965 for scholarships for students from the city, and starting an Upward Bound program.  She was prominent in national educational associations and D.C. organizations, serving on such diverse boards as the Greater Washington Educational Television Association and Washington Opportunities for Women, among many others.

The campus grew along with the student body, and Sr. Margaret led campaigns and building programs for a new library, fine arts building, and a residence hall; plans for many more buildings were drawn.  But the wave of coeducation at formerly all-male universities proved to be a setback for Trinity and all women’s college, and by the early 1970’s enrollment was in a sharp decline.  Believing that the women’s college was still an important form of education, Sr. Margaret continued to push for innovative changes to keep Trinity competitive in the changing landscape of higher education.  After sixteen years in office, she resigned from the presidency in 1975.

After a sabbatical at Yale, Sr. Margaret returned to Trinity as a professor of English where she continued to teach Shakespeare and her beloved poets Hopkins, Yeats and Eliot.  She was especially fond of quoting T.S. Eliot:  “Time present and time past are both perhaps present in time future, and time future contained in time past.”

Susan Margaret Claydon was born on July 19, 1923, in New Rochelle, New York, to George Thomas and Susan Murray Claydon, the oldest of six children. She is survived by her sister, Katherine C. Lightfoot ’53 of Vero Beach, Florida, 13 nephews and nieces including Kathleen Keefe ’78, and dozens of great nieces and nephews. She attended New Rochelle High School. She enrolled as a freshman at Trinity in the fall of 1941, and was part of the generation of college students in Washington in the aftermath of Pearl Harbor and through World War II. She entered the Sisters of Notre Dame de Namur in 1946, teaching Latin at several SND high schools until returning to Trinity in the English Department in 1952. She served as Trinity’s president from 1959 to 1975, and then as a professor of English until her retirement in 2004. She continued to live in the SND community at Trinity until moving to Mount Notre Dame in Cincinnati in 2015.
Full Text Press Release https://discover.trinitydc.edu/sr-margaret-claydon/
Posted by Jesus Caritas Est at 10:08 AM