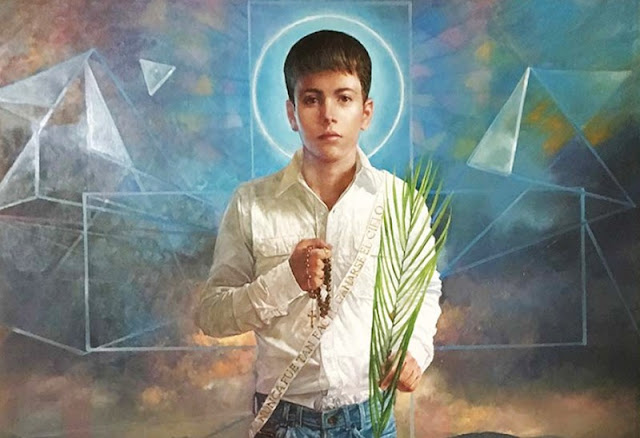 Saint José Luis Sánchez del Rio is the newest Mexican saint, recently canonized on October 16th, 2018. Although José was young and died as a martyr at age 14, he was a powerful example of youth, bravery, and faith.

José was born in 1913 in Sahuayo, Michoacán, México. He was the third of four children. José loved his faith and grew up with a strong devotion to Our Lady of Guadalupe. When José was twelve years old, the Cristero Wars began in Mexico. During this period in history the Mexican government attempted to extinguish the influence of the Catholic Church throughout the country. It persecuted the Catholic Church by seizing property, closing religious schools and convents, and executing Catholic priests. In defense of the Church, the peasants of many of the central and western states in Mexico rebelled against the government. Even though he was too young to join the rebellion, José desperately wanted to be a Cristero and stand up for his faith. He begged his mother saying, “Mama, do not let me lose the opportunity to gain Heaven so easily and so soon.” He was eventually allowed to join the effort as a flag bearer.

During a battle José was captured and was asked to deny his faith and the Cristero cause. José refused and was tortured terribly. Refusing to renounce his faith angered the government soldiers so much that they cut off the bottom of his feet. As José was forced to walk through town, he recited the rosary, prayed for his enemies, sang songs to Our Lady of Guadalupe, and proclaimed, “I will never give in. Vivo Cristo Rey y Santa Maria de Guadalupe!”
We celebrate the feast day of Saint José on February 10th and pray for his intercession on behalf of all persecuted Christians, children, and the people of Sahuayo, Michoacán, México.

Prayer:
Dear Lord,
Help me to be courageous and steadfast in my devotion to you. Help me to identify causes and injustices in my day that are worth defending and standing up for. Give me perseverance and a desire to help others at any cost. Help me to revere Christ as the king of my life.
Saint José Sánchez del Rio, pray for us.
Amen.