Saint February 29 : Saint Oswald the Saint of the Leap Year and Archbishop of Canterbury 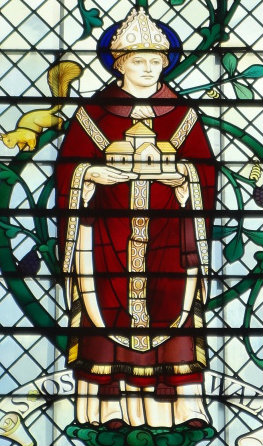 February 29.—ST. OSWALD, Bishop. OSWALD was of a noble Saxon family, He was brought up by his uncle, St. Odo, Archbishop of Canterbury,Archbishop of York, d. on 29 February, 992. Of Danish parentage, Oswald was brought up by his uncle Odo, Archbishop of Canterbury, and instructed by Fridegode. For some time he was dean of the house of the secular canons at Winchester, but led by the desire of a stricter life he entered the Benedictine Monastery of Fleury, where Odo himself had received the monastic habit. He was ordained there and in 959 returned to England betaking himself to his kinsman Oskytel, then Archbishop of York. He took an active part in ecclesiastical affairs at York until St. Dunstan procured his appointment to the See of Worcester. He was consecrated by St. Dunstan in 962. Oswald was an ardent supporter of Dunstan in his efforts to purify the Church from abuses, and aided by King Edgar he carried out his policy of replacing by communities the canons who held monastic possessions. Edgar gave the monasteries of St. Albans, Ely, and Benfleet to Oswald, who established monks at Westbury (983), Pershore (984), at Winchelcumbe (985), and at Worcester, and re-established Ripon. But his most famous foundation was that of Ramsey in Huntingdonshire, the church of which was dedicated in 974, and again after an accident in 991. In 972 by the joint action of St. Dunstan and Edgar, Oswald was made Archbishop of York, and journeyed to Rome to receive the pallium from John XIII. He retained, however, with the sanction of the pope, jurisdiction over the diocese of Worcester where he frequently resided in order to foster his monastic reforms (Eadmer, 203). On Edgar's death in 975, his work, hitherto so successful, received a severe check at the hands of Elfhere, King of Mercia, who broke up many communities. Ramsey, however, was spared, owing to the powerful patronage of Ethelwin, Earl of East Anglia. Whilst Archbishop of York, Oswald collected from the ruins of Ripon the relics of the saints, some of which were conveyed to Worcester. He died in the act of washing the feet of the poor, as was his daily custom during Lent, and was buried in the Church of St. Mary at Worcester. Oswald used a gentler policy than his colleague Ethelwold and always refrained from violent measures. He greatly valued and promoted learning amongst the clergy and induced many scholars to come from Fleury. He wrote two treatises and some synodal decrees. Shared from Catholic Encyclopedia