Asia Bibi says she has ‘Forgiven’ those who wanted her Killed and says She "...held the hand of Christ" during Imprisonment 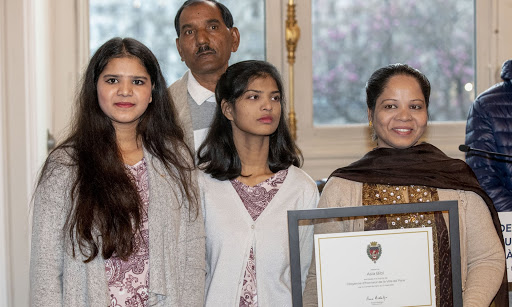 Asia Bibi, now in France, is the Christian woman who spent 10 years in prison due to blasphemy laws in Pakistan. Her real name is Aasiya Noreen - Āsiyāh Naurīn in Urdu but she was given the name in the media Asia Bibi.  She has asked for political asylum in France. Since being released she has granted several interviews. She was made an honorary citizen of Paris, France.

She explained to Aid to the Church in Need that "It is thanks to the media that I am still alive."

In another interview with French24:
"I forgiven all those who have trespassed against me"
Asia knows that she is not alone in her condition, and she wants to use the publicity that is given to her to speak for those who are still accused of blasphemy in her native country. Asia explained,
"During my detention, I held the hand of Christ, it is thanks to him that I remained standing, do not be afraid!"

She owes her release to the French journalist Anne-Isabelle Tollet, whom she calls "her sister", and who assisted her in the publication of the book "Finally free! (Editions du Rocher). This autobiography reports on how the Pakistani Catholic peasant woman became a global icon of resistance to Islamic fundamentalism. Asia Bibi, accused of blasphemy by her Muslim neighbors, spent 10 years in prison, under threat of execution after being sentenced to death. The anti-blasphemy law in Pakistan is often invoked to settle simple neighborhood disputes and often results in the death of the accused. Those who are accused are even lynched by angry crowds or "disappear", "committed suicide" in prison. The media coverage of Asia Bibi saved her from this fate. Acquitted on appeal by the Pakistani Supreme Court on October 31, 2018, she was finally able,  to take refuge in Canada on May 8, 2019 thanks to international pressure. Now there is "Asia Bibi jurisprudence" that allows those accused of blasphemy to turn against their accusers. Anti-blasphemy law still exists in Pakistan, but it is now the situation is slightly better for the accused.
On 4 January 2011, in Islamabad, the governor of Punjab Salmaan Taseer was assassinated by Malik Mumtaz Hussein Qadri, a 26-year-old member of his security team, because of his defence of Noreen and opposition to the blasphemy law. Minority Affairs Minister Shahbaz Bhatti, on 2 March 2011, Bhatti was shot dead by gunmen who ambushed his car near his residence in Islamabad, because of his position on the blasphemy laws and support of Bibi.
He had been the only Christian member of Pakistan's cabinet.[ Of her native country, Pakistan, Asia explains, "We have been Christians for over a thousand years" She recalled her childhood in her native Pakistan: "I was playing with the Muslim neighbors, there was no separation."  However, growing up, she realized that differences separated Christians and Muslims in her country. It also happens that Muslims in search of wives kidnap young Christian women and forcibly convert them to marry them.

She also found out that Muslims regarded Christians as unclean. It is due to this belief that her life was disrupted on June 14, 2009. While she was working with Muslim neighbors, she was asked to fetch water. She obeyed, drawing water, then drinking the contents of a cup before bringing the container. One of the women refuses to drink because Asia has made the liquid “impure”. Asia Bibi defended herself by saying that she did not believe that the Prophet Muhammad would agree. To which she was told that she had committed blasphemy. Following prison, her family escaped while threatened by fundamentalists, who threatened to hang her.


She hopes to return one day to Pakistan: "This is my homeland, I love Pakistan passionately! "She says. In the meantime, she wishes to find refuge in France: "I found a lot of love here, I think I would do well here".
Edited from ACN and France 24