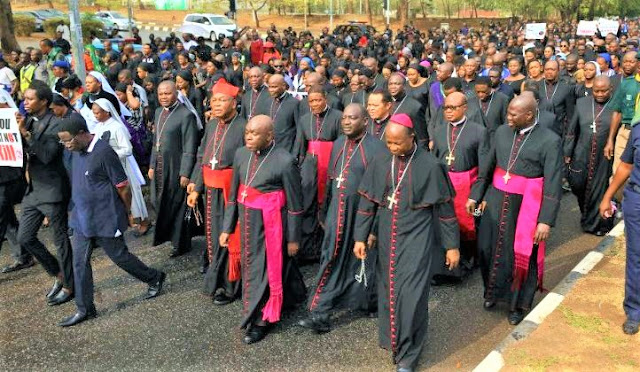 Abuja (Agenzia Fides) - "We are protesting against the brutal killings of innocent Nigerians by Boko Haram and terrorist herdsmen who are invading peoples farm lands forcefully. We have embarked on a peaceful protest on behalf of over 50 million Catholics and over 100 million Christians in Nigeria", said His Exc. Mgr. Augustine Akubueze, Archbishop of Benin City and President of the Bishops' Conference of Nigeria (CBCN), who led a protest march by hundreds of people against the kidnappings for ransom and the massacres committed by the terrorists of Boko Haram and the Fulani herdsmen in different areas of the Country.
The march from the National Christian Centre to the Our Lady Queen of Nigeria in Abuja was promoted by the CBCN accusing the Federal Government of insensitivity to the killings of Nigerians by Boko Haram terrorists, rating its response to insecurity below average.
"The killing of God’s children is evil, the failure to protect innocent people from the relentless attacks is evil, the lack of persecution by terrorists is evil, our government’s response to terrorists’ attack is for lack of better words, far below average", said Mgr. Akubueze who recalled that "there have been too many mass burials, too many kidnappings of school children, of travellers, invasion if people’s homes, invasion of sacred places like church, mosque, and seminary among others".
"The several attacks and the loss of numerous lives are now taken as normal. Our government seems completely insensitive to the plight of Nigerians; a government that totally ignores the cries of those who elected it is set up for a fantastic failure. It doesn’t matter which party is in power".
Finally, Mgr. Akubueze appealed to the international community to assist Nigeria in meting out the same treatment it carried out on other terrorist groups in parts of the world, on Boko Haram terrorists to stop the over 12 years of terrorist attacks on Nigerians. (L.M.) (Agenzia Fides, 4/3/2020)
Vatican News reports that Boko Haram has killed more than 27,000 people making Nigeria the third most dangerous country after Afghanistan and Iraq on the 2019 Global Terrorism Index.
Posted by Jesus Caritas Est at 10:09 AM