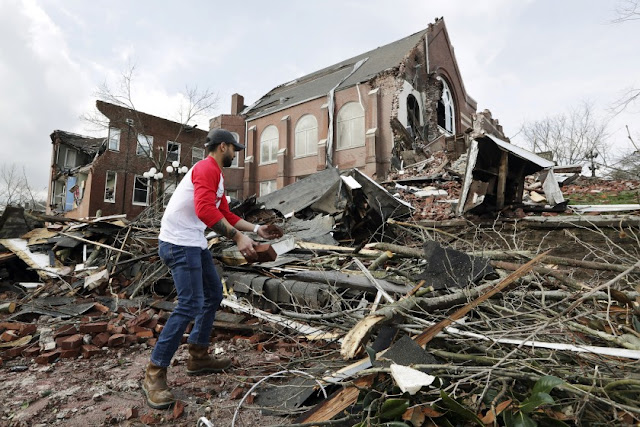 CBC news reports that a Tennessee tornadoes killed at least 25 people, many in their sleep.
Some voters were prevented from participating in Super Tuesday voting for the Democrats.

Tornadoes ripped across Tennessee early Tuesday, March 3, 2020, shredding more than 140 buildings and burying people in piles of rubble and wrecked basements. At least 25 people were killed, some before they could even get out of bed, authorities said.

In the hours after midnight moved so quickly that many people in their path could not flee to safer areas.

"It hit so fast, a lot of folks didn't have time to take shelter," Putnam County Mayor Randy Porter said. "Many of these folks were sleeping."

Early findings by National Weather Service survey teams indicated that the damage just east of Nashville was inflicted by a tornado of at least EF-3 intensity, the agency said.

One twister caused severe damage across a 16-kilometre stretch of downtown Nashville, wrecking businesses and homes and destroying the tower and stained glass of a historic church. Another erased homes from their foundations along a three-kilometre path in Putnam County.

The death toll jumped to 25 Tuesday afternoon, as first responders pulled apart wreckage, hoping to find people alive in the rubble of their homes.

"A lot of these homes had basements and we're hopeful there are still people down in there," he said.

The historic Catholic Church of the Assumption in the Germantown area of Nashville suffered some significant damage in the tornado. Fr. Bede, the pastor, is safe and removed the Blessed Sacrament during the storm. The Church of the Holy Name, across the Cumberland River on Woodland Street had roof damage.

U.S. President Donald Trump announced plans to visit the disaster area on Friday. "We send our love and our prayers of the nation to every family that was affected," he said. "We will get there, and we will recover, and we will rebuild, and we will help them."

The tornadoes were started by a line of severe storms that stretched from Alabama into western Pennsylvania.


The outage also extended to the capitol building, forcing the cancellation of legislative meetings.


Metro Nashville Public Schools said its schools would be closed Tuesday because of the tornado damage.

The storm knocked out electricity, Thompson said, but the precinct's two electronic voting machines had battery backups and a few people had cast ballots less than an hour later.