Due to Sickness, Pope Francis will not travel to Lenten Retreat but follow the exercises from the Vatican 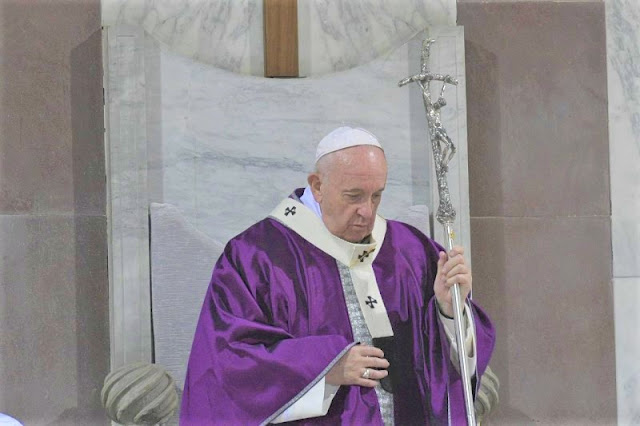 Asking the faithful gathered in St. Peter’s Square to remember the Spiritual Exercises of the Roman Curia in their prayers, Pope Francis revealed that a cold will be keeping him indoors, therefore, he will not be going to Ariccia for the annual retreat.
The Pope had been scheduled to travel to the town in the Alban Hills outside Rome this afternoon to participate in a week-long cycle of meditations.
“I will be following from here,” he said, adding that although he will not physically participate in the retreat, he will spiritually join the Curia and all those who are experiencing moments of prayer.
The preacher who will be leading the retreat in the town of Ariccia this year is Jesuit Father Pietro Bovati, Secretary of the Pontifical Biblical Commission.

Papal retreat to focus on listening to God as prophetic experience
As always, the retreat takes place at Casa Gesù Divin Maestro (the Divine Master House) in the little town not far from Rome.
The theme chosen for this year’s meditations is “The bush was on fire (Ex 3:2) – The encounter between God and man in light of the book of Exodus, the Gospel of Matthew, and the prayer of the Psalms”.
Why Ariccia?
Unlike the Popes who preceded him, in 2014 Pope Francis chose a place outside the Vatican for the Spiritual Exercises.

His decision was explained by Father Ciro Benedettini, the then deputy director of the Holy See Press Office who emphasized that it is common practice for Jesuits to perform the Exercises outside the place where they live.