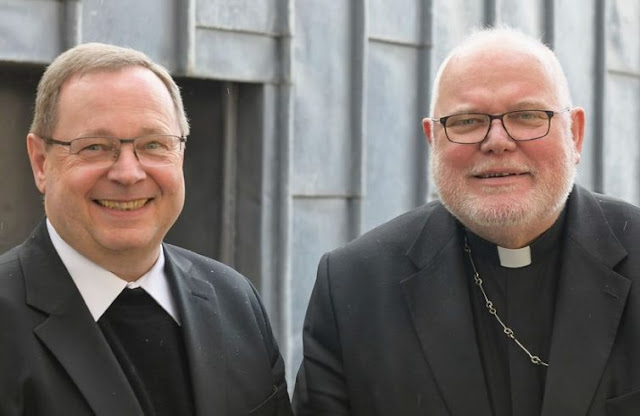 German Bishops and Associations Congratulate New DBK Chairman
"He is now the right man for the Bishops' Conference and for the Catholic Church in Germany": Numerous German bishops and Catholic associations react extremely positively to Georg Bätzing's election as new DBK chairman. One even reveals how quickly Bätzing was chosen.


The election of Bishop Georg Bätzing of Limburg as chairman of the German Bishops' Conference (DBK) has triggered numerous positive reactions. Archbishop of Freiburg Stephan Burger congratulated the new bishops' conference chair and praised Bätzing for his ability to promote exchange and dialogue. He wished Bätzing "that with patience, perseverance and prudence he would strengthen the unity among us bishops and with the Holy Father so that we as a church can work with all our might for the people," said Burger. Only a united church has a future.

The German bishops elected Bätzing (age 58) on Tuesday, March 3, 2020 in Mainz as the new chair of their conference and thus the successor to Cardinal Reinhard Marx. Bätzing has been Bishop of Limburg since 2016. In the episcopal conference, he has headed the sub-commission for interreligious dialogue and worked for the world church commission.

Cardinal Rainer Maria Woelki of Cologne wished Bätzing on Twitter "God's blessing and a happy hand". Bishop Franz-Josef Overbeck shared the congratulations of his diocese Essen on Facebook. Münster's Bishop Felix said: "Georg Bätzing is someone who can integrate, inspire and moderate." These skills are required when it comes to the reform dialogue of the Catholic Church in Germany - the Synodal Way - "but also when we as a church want to give a more credible picture again".


Bishop Stephan Ackermann of Trier is very happy about Bätzing's choice. "He was my preferred candidate," said Ackermann on Tuesday, adding: "He is now the right man for the Bishops' Conference and for the Catholic Church in Germany. He can integrate well and is also a strong leader."

Hildesheim Bishop Heiner Wilmer wishes Bätzing "a lot of skill and foresight in dealing with challenges such as the Synodal Way, which our German Catholic Church has to overcome now and in the future", says a statement published on Tuesday by the Diocese of Hildesheim. Bätzing should give the Catholic Church in Germany a voice and a face and represent it powerfully in society, ecumenism and in interreligious dialogue.

For the Rottenburg-Stuttgart Bishop Gebhard Fürst, Bätzing is an experienced bridge builder and a man of balance, says the head shepherd. With regard to the dialogue process of the Catholic Church, Fürst was convinced that Bätzing would continue the synodal path that had started.


According to Bishop Franz Jung of Würzburg, it quickly became clear in the election on Tuesday that Georg Bätzing would be the new DBK chairman.

According to Bishop Franz Jung of Würzburg, the election process "showed very quickly that it could amount to Bishop Bätzing". He was very pleased with this result and heartily congratulated Bätzing on this new task, said Jung, according to a message from the diocese. "I thank him for his willingness to accept the choice given the tasks to be accomplished." It has become clear that in future no one can and should shoulder this task alone, without involving the other bishops and building on their competence, said Jung.

The Bishop of Fulda Michael Gerber congratulated his Limburg counterpart on his election and thanked him for his willingness to take on the task. "Bishop Bätzing has important qualifications for this. For example, during his time as vicar general of the diocese of Trier, he played a key role in shaping the synod there," said Gerber, according to a message from the diocese. He can now use this experience in the progress of the Synodal Way and in other important processes of the Catholic Church in Germany. Bishop Heinz Josef Algermissen, emeritus of Fulda, also congratulated Bätzing on the election and wished him "in the face of this great and certainly not easy task" deep trust in God's leading companion. At the same time, he promised him his prayer for the "spirit of direction" on the way to the future.

The president of the Central Committee of German Catholics (ZdK), Thomas Sternberg, said in Bonn that he had got to know Bätzing as a clever and thoughtful partner. In the diocese of Limburg, which was badly shaken, he quickly achieved high esteem.
Edited and Translated from Katholish.de
Posted by Jesus Caritas Est at 8:55 AM