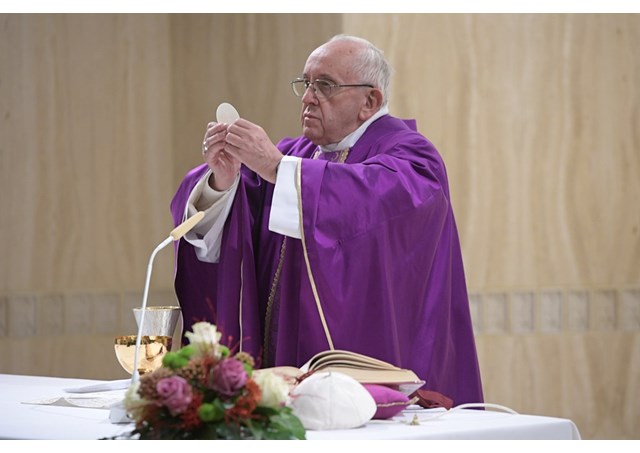 Pope offers Mass for pastors
Pope Francis’ intention for Mass on Friday was for pastors, asking the Lord to give them strength and the ability to “choose the best ways to help”.
By Vatican News

Beginning his Mass on Friday morning at the Casa Santa Marta, Pope Francis reminded everyone that we are “uniting ourselves to those who are ill and to their families”.  He then announced his intention for the liturgy which manifests that he understands the dilemma that priests in Italy find themselves in.

“I would also like to pray today for pastors who need to accompany the people of God during this crisis. May the Lord grant them the strength and the ability to choose the best ways to help. Drastic measures are not always good.  Therefore, we pray that the Holy Spirit might grant pastoral discernment to pastors so that they might perceive measures that might not leave the holy, faithful people of God alone, and so that people of God might feel accompanied by their pastors”.

Later, during his homily, the Pope reflected on the parable of the tenants presented in the Gospel of the day (Matthew 21:33-46).

God and His people
This parable refers to God’s care for His people, the Pope said. The vineyard is the chosen people, the tenants are the Doctors of the law, and the servants are the prophets. God did His work well in the vineyard, he Pope said. The hedge, the winepress and the tower can be compared to God’s election of the chosen people, the promise He made to Abraham, and the covenant relationship He entered into with them on Sinai.

“The people must always keep that election in their memory – that they are a chosen people; the promise –so they always look ahead in hope; and the covenant in order to daily live in fidelity.“

Infidelity
When God sends His servants to receive the fruit of the vineyard from the tenants, they are beaten, killed and stoned. Instead of respecting His own Son, they kill Him to get His inheritance. “They robbed the inheritance”, Pope Francis said. “It’s a story of infidelity” to God’s call ; infidelity to their election, to the promise and to the covenant, which are God’s gifts.

“They don't understand that it was a gift. They take it as a possession. These people appropriated the gift. They took away the aspect of the gift to transform it into their own possession. The gift that was richness, openness and blessing was closed, put inside a cage”.

Forgetfulness
Pope Francis attributes this transformation of the gift into a possession as the result of the “sin of forgetting”. We forget that “God has made a gift of Himself to us so that He might be given as a gift”. Instead of receiving the gift, we begin to own it.

“So, the promise is no longer a promise, the election is no longer an election, the covenant is interpreted according to my own opinion. It becomes an ideology”.

Roots of clericalism
It is possible that the Gospel hints at clericalism which was already present even then, the Pope said. Clericalism, “always denies” the gratuitousness of the election and the promise. Since God has made a gift of Himself to us, this gift must be given freely to others and not as if it belongs to us.

The Pope’s Prayer
The Pope concluded his homily with a prayer that we might be granted the grace of “receiving the gift as a gift and of transmitting this gift as a gift and not as a possession, not in a sectarian, rigid or clerical manner”.
FULL TEXT Source: VaticanNews.va
Posted by Jesus Caritas Est at 10:34 AM