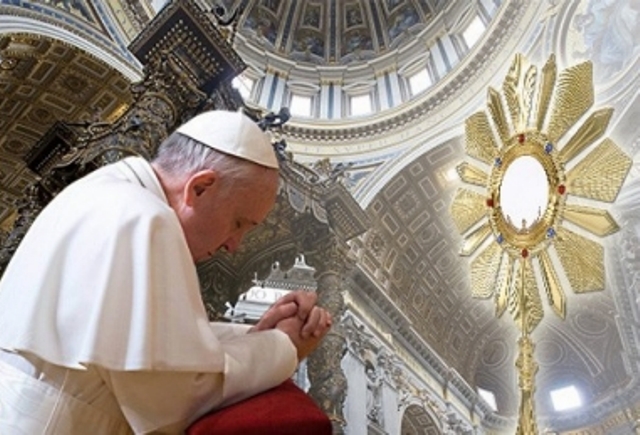 Parish churches in Rome to remain open for private prayer
In agreement with Pope Francis, the Cardinal Vicar of the Diocese of Rome has decided to amend an earlier decree closing Rome’s churches. Parish churches, as well as equivalent missionary centres, will now be allowed to remain open, while complying with measures to avoid the spread of the coronavirus.
By Vatican News

The Diocese of Rome acted quickly to allow some churches in the city to remain open, one day after an initial decision had been made to close places of worship to prevent the spread of the coronavirus, Covid-19.

On Friday morning, Pope Francis prayed “that the Holy Spirit might grant pastoral discernment to pastors so that they might perceive measures that might not leave the holy, faithful people of God alone, and so that the people of God might feel accompanied by their pastors”. With the Holy Father’s agreement, the Cardinal Vicar, Angelo De Donatis, exercising pastoral discernment and wishing to avoid disorientation or confusion to the faithful, issued a new decree allowing parish churches, and some other equivalent pastoral missions, to remain open for private prayer.

In a letter to the faithful of the Diocese, Cardinal De Donatis explained that the decision to close the churches of Rome had not been made out of “irrational fear, or worse, a pragmatism devoid of hope”, but as a means of preventing contagion. However, he explained, there is also a need to ensure that people do not feel even more isolated, prompting the revised pastoral provisions.

Cardinal De Donatis said the Church is relying on the “wise discernment” of priests. “Be very close to the people of God”, he urged them. “Make sure that every person feels loved and accompanied, help everyone to perceive that the Church does not close its doors to anyone, but is concerned that none of the ‘little ones’ should risk their lives or be forgotten”. He encouraged them to bring “the comfort of the sacraments” to those who are ill and to ensure the help necessary for the poor, while taking every possible precaution to avoid anything that could endanger the health of others.

Cardinal De Donatis also encouraged prayer in the family, maintaining “the tradition of our parents and grandparents”.

The Cardinal Vicar concluded his letter by calling on all the faithful of the diocese to entrust themselves once more to Our Lady of Divine Love, the Madonna del Divino Amore.