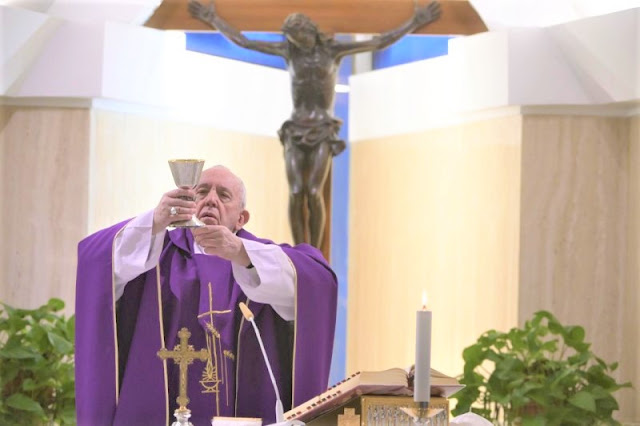 "Look at the crucifix in the light of redemption"

Let us pray today for those who are homeless, at this moment when we ask to be inside the house. For the society of men and women to become aware of this reality and to help, and the Church to welcome them.

The snake is certainly not a nice animal: it is always associated with evil. Even in revelation, the serpent is precisely the animal that the devil uses to induce sin. In the Apocalypse the devil is called "ancient snake", the one who from the beginning bites, poisons, destroys, kills. This is why it cannot succeed. If you want to succeed as someone who offers beautiful things, these are fantasy: we believe them and so we sin. This is what happened to the people of Israel: they did not endure the journey. He was tired. And the people said against God and against Moses. It's always the same music, isn't it? "Why did you take us out of Egypt? To make us die in this desert? Because there is no bread or water and we are sick of this light food, manna "(cf. Nm 21.4-5). And the imagination - we read it in recent days - always goes to Egypt: "But, we were fine there, we ate well ...". And also, it seems that the Lord did not endure the people at this time. He became angry: the wrath of God shows up at times ... And "then the Lord sent among the people burning snakes which bit the people and died. A large number of Israelites died" (Nm 21.5). moment, the serpent is always the image of evil: the people see sin in the serpent, see what has done evil in the serpent. And he comes from Moses and says: "We have sinned because we have spoken against the Lord and against you . Plead with the Lord to drive these snakes away from us "(Nm 21,7). Repent. This is the story in the desert. Moses prayed for the people and the Lord said to Moses:" Make a snake and put it on a pole of metal. Whoever has been bitten and looks at him, will remain alive "(Nm 21,8).

I am thinking: is this not an idolatry? There is the snake, there, an idol, who gives me health ... It is not clear. Logically, it is not clear, because this is a prophecy, this is an announcement of what will happen. Because we also heard as a close prophecy in the Gospel: "When you have exalted the Son of man, then you will know that I am and that I do nothing by myself" (Jn 8:28). Jesus raised: on the cross. Moses makes a snake and raises it up. Jesus will be raised up, like the serpent, to give salvation. But the crux of the prophecy is precisely that Jesus made himself a sin for us. He did not sin: he became sin. As St. Peter says in his Letter: "He carried our sins upon himself" (cf. 1Pt 2,24) And when we look at the crucifix, we think of the Lord who suffers: all that is true. But let's stop before we get to the center of that truth: at this moment, You seem the greatest sinner, You made yourself a sin. He has taken upon himself all our sins, has annihilated himself until now. The cross, it is true, is a torture, there is the revenge of the doctors of the Law, of those who did not want Jesus: all this is true. But the truth that comes from God is that He came into the world to take our sins upon himself to the point of becoming sin. All sin. Our sins are there.

We have to get used to looking at the crucifix in this light, which is the truest, it is the light of redemption. In Jesus suffering for sin we see the total defeat of Christ. He doesn't pretend to die, he doesn't pretend not to suffer, alone, abandoned ... "Father, why did you abandon me?" (cf. Mt 27.46; Mk 15.34). A snake: I am raised like a snake, like that which is all sin.

It is not easy to understand this and, if we think, we will never reach a conclusion. Just contemplate, pray and thank.

My Jesus, I believe that you are truly present in the Blessed Sacrament of the altar. I love you above all things and I desire you in my soul. Since I cannot receive you sacramentally now, at least spiritually come to my heart. As already come, I embrace you and I join everything with you. Don't let it ever separate me from you. Amen.
Posted by Jesus Caritas Est at 10:02 AM