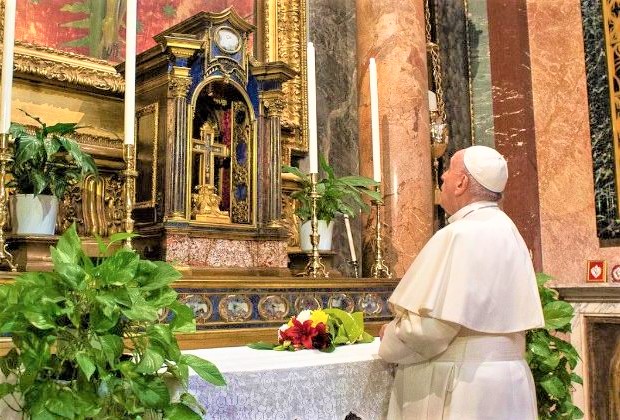 Pope Francis’ twin prayers for an “end to the pandemic”
Pope Francis left the Vatican on Sunday to visit two important pilgrimage sites in Rome to pray for the city and the world, in the midst of the Covid-19 coronavirus outbreak.
By Vatican News

Two intense moments of prayer: one before the ancient icon of Maria Salus Populi Romani at the Basilica of St. Mary Major, and the other at the foot of a wooden crucifix that protected Rome from a great plague.

Pope Francis spent his afternoon on the Third Sunday of Lent seeking to underline his closeness to those who suffer by imploring the special protection of Our Lady.

Mary before the Cross
The Director of the Holy See Press Office, Matteo Bruni, announced the Pope’s visits in a communique on Sunday.

“This afternoon, just after 4 PM, Pope Francis left the Vatican and made a private visit to the Basilica of St. Mary Major, to offer a prayer to the Virgin Mary, Salus Populi Romani, where her icon is kept and venerated. Then, after taking a walk along the Via del Corso – as if making a pilgrimage – he visited the church of San Marcello on the Corso, where a miraculous crucifix is housed. In 1522 it was carried in procession throughout the neighborhoods of the city so that the “Great Plague” might cease in Rome. With his prayer, the Holy Father pleaded for an end to the pandemic that has struck Italy and the world. He also implored the healing of the many sick people, remembered the numerous victims of these past days, and asked that their families and friends might find consolation and comfort. His prayer intention was also extended to healthcare workers, doctors, nurses, and all those working in these days to guarantee the smooth functioning of society. The Holy Father returned to the Vatican around 5:30 PM.”

Devotion to the Marian icon
Pope Francis’ special devotion to Our Lady Salus Populi Romani is well-known. He visits her icon on major Marian feast days, and makes a point to stop in for a prayer both before and after his international Apostolic Journeys.

In 593 Pope St. Gregory the Great carried the icon in procession to stop a plague. And in 1837 Pope Gregory XVI invoked her to put an end to a cholera epidemic.

Miraculous crucifix
The Pope’s second stop on Sunday was also significant, considering the critical moment the world is going through.

The church of San Marcello on the Corso houses a venerated wooden crucifix from the 15th century, which scholars hold is the most realistic in Rome. It even survived a fire, and saved the city from a plague. Pope St. John Paul II embraced that same crucifix to mark the culmination of the Day of Forgiveness during the Jubilee Year of 2000.

From the ashes
The numerous traditions of miracles attributed to the “Most Holy Crucifix” began on 23 May 1519.

On that night a large fire completely destroyed the church that bears Pope Marcel’s name. The entire building was found in ruins the next morning. But from the ashes emerged the crucifix of the main altar, untouched. A small oil lamp still burned at the Crucified’s feet.

The scene greatly touched the faithful of Rome, and several began to meet every Friday evening to pray. Pope Leo X ordered the rebuilding of the church in 1519.

To stop Rome’s great plague
Three years after the fire, Rome was hit by the “Great Plague”.

The faithful carried the crucifix in procession – despite the bans understandably put in place by the authorities to halt the spread of the contagion. The crucifix was carried through the streets of Rome toward St. Peter’s Basilica. The procession lasted 16 days: from 4 to 20 August 1522. As it progressed, the plague showed signs of retreating, and every neighborhood sought to keep the crucifix as long as possible.

Finally, as the crucifix reentered the church, the plague ceased altogether.

Since 1600, the procession from the church of San Marcello to St. Peter’s Basilica became a tradition repeated during Holy Years. The names of the Popes who called each Jubilee are inscribed on the back of the crucifix, along with the year.
Full Text + Image Source: Vatican News
Posted by Jesus Caritas Est at 7:10 PM

So glad to see the Pope praying, but seeing the empty streets and Churches is very sad. It's as if we are at a crossroads in our 2,000+ history. What will happen now? Will the CardiCnals and Bishops repent of their past behaviors? Will they finally own up to the error of their ways, and humble themselves by repenting and converting? Will they ask the Faithful to humble themselves and pray and fast? Will Pope Francis finally answer the Dubia? Will he finally use clarity when talking about Church Doctrine and the Synods? Only time will tell.