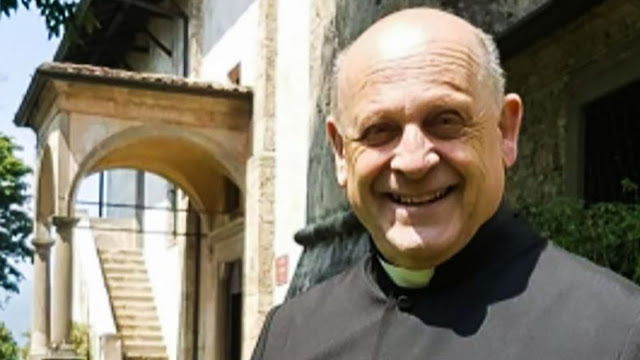 Fr Giuseppe Berardelli, who died on the field as a priest, and gave up his respirator to give it to a younger person

Fr. Giuseppe had been priest of Casnigo for almost fourteen years and would have concluded his mission in Casnigo. He life ended early, in a hospital in Lovere, hit by the coronavirus. Already last year he had had health problems. His perennial smile, his availability, but also his activism in the realization of important and expensive works, that smile hid the worries. “He was a simple, straightforward person, with a great kindness and helpfulness towards everyone, believers and non-believers. His greeting was 'peace and good'. Always friendly and available to the public administration, associations and not only those of the parish, he participated in all the events without ever being intrusive. The party of the conscripts of '47 never failed. Even for the funeral watches, he asked his relatives first if his presence was appreciated, to say the discretion he had. He was loved by everyone, his former parishioners still came from Fiorano after years to find him. But he also had an incredible ability to solve economic problems, to knock on the right doors for help.

"And I am deeply moved by the fact that the  Fr. Giuseppe Berardelli - to whom the parish community had bought a respirator - asked to assign it to someone younger than him": the words are from a Healthcare Worker of the San Giuseppe di Casnigo Rest Home. Yes, Fr Giuseppe had given up on the respirator, even if he needed it, and this is perhaps the best photograph of the soul of a priest who in the years spent in Val Seriana had conquered everyone: “He was a priest who listened to everyone, he knew how to listen, whoever turned to him knew that he could count on his help ..."
The priest of Casnigo Fr/ Giuseppe Berardelli was 72 years old. Born on August 21, 1947, he was originally from Fonteno. Ordained priest on June 30, 1973, his first assignment had been coadjutor in the parish of San Giuseppe in the upper town, then in Calolzio from 1976 to 1984. He later became parish priest of Gaverina and from 1993 parish priest of Fiorano al Serio. In 2006 he was appointed archpriest of Casnigo. He had had health problems but he fought with his usual smile and that determination to those who rely on God. He died at the Lovere hospital. No funeral but the people of Caserta greeted him in their own way, at noon on Monday 16 March they looked out onto the balcony of their home and greeted him with applause.
Source: https://www.bergamonews.it/2020/03/24/addio-a-don-giuseppe-di-casnigo-gli-avevano-donato-un-respiratore-lha-lasciato-ad-altri/362189/
Posted by Jesus Caritas Est at 11:34 PM