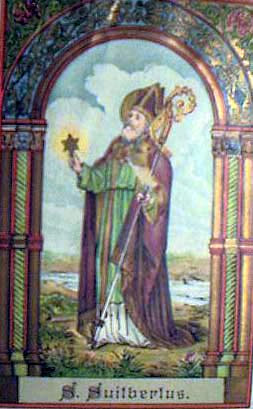 Apostle of the Frisians, b. in England in the seventh century; d. at Suitberts-Insel, now Kaiserswerth, near Dusseldorf, 1 March, 713. He studied in Ireland, at Rathmelsigi, Connacht, along with St. Egbert. The latter, filled with zeal for the conversion of the Germans, had sent St. Wihtberht, or Wigbert, to evangelize the Frisians, but owing to the opposition of the pagan ruler, Rathbod, Wihtberht was unsuccessful and returned to England. Egbert then sent St. Willibrord and his twelve companions, among whom was St. Suitbert. They landed near the mouth of the Rhine and journeyed to Utrecht, which became their headquarters. The new missionaries worked with great success under the protection of Pepin of Heristal, who, having recently conquered a portion of Frisia, compelled Rathbod to cease harassing the Christians. Suitbert laboured chiefly in North Brabant, Guelderland, and Cleves. After some years he went back to England, and in 693 was consecrated in Mercia as a missionary bishop by St. Wilfrid of York. He returned to Frisia and fixed his see at Wijkbij Duurstede on a branch of the Rhine. A little later, entrusting his flock of converts to St. Willibrord, he proceeded north of the Rhine and the Lippe, among the Bructeri, or Boructuari, in the district of Berg, Westphalia. This mission bore great fruit at first, but was eventually a failure owing to the inroads of the pagan Saxons; when the latter had conquered the territory, Suitbert withdrew to a small island in the Rhine, six miles from Dusseldorf, granted to him by Pepin of Heristal, where he built a monastery and ended his days in peace. His relics were rediscovered in 1626 at Kaiserwerth and are still venerated there. St. Suitbert of Kaiserwerdt is to be distinguished from a holy abbot, Suitbert, who lived in a monastery near the River Dacore, Cumberland, England, about forty years later, and is mentioned by Venerable Bede.

(Taken From Catholic Encyclopedia)
Posted by Jesus Caritas Est at 8:33 AM