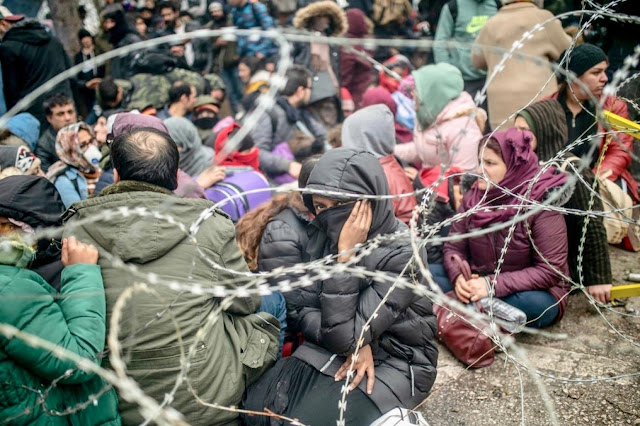 Asia News reports that they are deluded by Erdogan, rejected by Europe. The tragedy of thousands of migrants on the border
From the euphoria of a possible expatriation to despair in the face of  Athens' wall. The vanished dream of a free and dignified life. The violence of the Greek military, which pushes migrants back to no man's land. Athens or Ankara "is the same thing". The Turkish president uses migrants and refugees as a weapon of war against Brussels.


Istanbul (AsiaNews / Agencies) - Destroyed, demoralized, without knowing where to go, trapped in a no-man's land between Turkey and Greece, or Europe, unable to continue but - at the same time - without any desire to go back. In the space of a few days, thousands of migrants went from the euphoria of the green light for expatriation by Turkish government, to despair over the wall opposed by the Athens government and the violence of the Hellenic far right groups. They arrived, they say, at the border by train, on board buses, in taxis convinced "to get over to the other side".

The dream of these people - not millions as threatened by Turkish President Recep Tayyip Erdogan, but certainly several thousand - of leading a free and dignified life in Europe seems to have broken on the barbed wire of the Turkish border crossing of Pazarkule (Kastanies). "After being pounded with tear gas by the Greek police,"Mahmut, a young Iraqi father told Le Monde, "we have turned back back" and now "we don't know what will happen".

Sitting on the curb, 29-year-old Hossein and 27-year-old Nafiseh, a young couple from Tehran, are so stunned that it is difficult to speak: “It was very hard. After finding our hiding place, an abandoned house where we had taken refuge, masked Greek soldiers beat us. Then they stripped us of sleeping bags, wallets, cell phones and our documenments", concludes the girl, "we have nothing left".

Ahmed, a young Afghan, was also subjected to violence and beatings after believing he had arrived "in Europe"; on the contrary, he was in no-man's-land between Greece and Turkey. Athens or Ankara, he says, “for me it is the same thing. Whether on one side or the other, we are tossed about like bags of dirty laundry. "

From 5 to 10 thousand migrants have been massed for three days in the buffer zone of Pazarkule, who refuse to leave still believing in a miracle. The Turks let them pass, while the Greeks repel them with water or tear gas to disperse them, in vain. Erdogan uses them as a weapon of war against Brussels, to which he has communicated that he has broken the controversial agreement on migrants signed in 2016, after benefiting from it in economic terms in recent years. "Soon - he warns - their number will become millions".

The statements by the Turkish president raised the harsh reaction of Fevzi Pekcanli, Edirne representative of the Republican People's Party (Chp, opposition), inspired by Atatürk. Outraged by the fact that refugees have become an "instrument of pressure between states", he attacks Erdogan accusing him of spreading "totally false" data and of being careless in the face of the humanitarian drama in the region: "If it continues like this - he says - we will many Aylan Kurdi ".

In the background, inert and unable to express a firm position, the European Union is called to face the most difficult, but certainly not unpredictable, scenario: a migratory wave from the southern border triggered by Turkish policies, while the more general indifference drama of thousands of human lives.
Full Text Release AsiaNewIT - Image Source: Middle East Eye - Google Images
Posted by Jesus Caritas Est at 10:12 AM