At Easter Tuesday Mass, Pope Francis Prays for " the grace of unity among us. May the difficulties of this time make us discover the communion between us." Full Video/Text 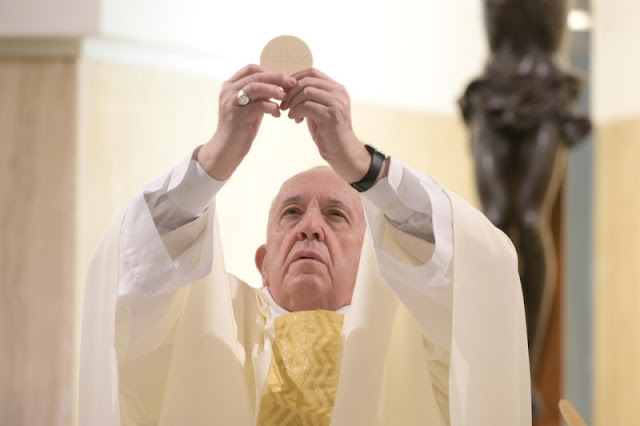 "The grace of loyalty"

Let us pray that the Lord will give us the grace of unity among us. May the difficulties of this time make us discover the communion between us, the unity that is always superior to any division.

Peter's preaching, on the day of Pentecost, pierces the hearts of the people: "What you crucified is risen" (cf. Acts 2:36). "Upon hearing these things they felt their heart pierced and said to Peter and the other apostles: 'What should we do?'" (Acts 2.37). And Peter is clear: “Get converted. Repent. Change life. You who have received the promise of God and you who have strayed from the Law of God, from so many things of yours, among idols, so many things ... get converted. Return to fidelity "(cf. Acts 2.38). Converting is this: returning to being faithful. Loyalty, that human attitude that is not so common in people's lives, in our lives. There are always illusions that attract attention and many times we want to go behind these illusions. Loyalty: in good times and in bad times. There is a passage from the Second Book of Chronicles that affects me so much. It is in chapter XII, at the beginning. "When the kingdom was consolidated - he says - King Reboam felt safe and moved away from the law of the Lord and all Israel followed him" (cf. 2 Chron. 12.1). So says the Bible. It is a historical fact, but it is a universal fact. Many times, when we feel secure, we begin to make our plans and slowly move away from the Lord; we do not remain in loyalty. And my security is not what the Lord gives me. He is an idol. This is what happened to Rehoboam and the people of Israel. He felt safe - consolidated kingdom - he moved away from the law and began to worship idols. Yes, we can say, "Father, I don't kneel before idols." No, maybe you don't get on your knees, but that you look for them and many times in your heart you love idols, it's true. A lot of times. Your security opens the door to idols.

But is your security bad? No, it's a grace. Be sure, but also be sure that the Lord is with me. But when there is security and I at the center, I move away from the Lord, like King Reboam, I become unfaithful. It is so difficult to maintain loyalty. The whole history of Israel, and then the whole history of the Church, is full of infidelity. Full. Full of selfishness, of its own certainties that make the people of God turn away from the Lord, lose that fidelity, the grace of faithfulness. And even among us, among people, loyalty is not a cheap virtue, certainly. One is not faithful to the other, to the other ... "Be converted, return to fidelity to the Lord" (cf. Acts 2.38).

And in the Gospel, the icon of faithfulness: that faithful woman who had never forgotten all that the Lord had done for her. He was there, faithful, before the impossible, before the tragedy, a faithfulness that also makes her think that she is capable of carrying the body ... (cf. Jn 20:15). A weak but faithful woman. The icon of fidelity of this Mary of Magdala, apostle of the apostles.

Today we ask the Lord for the grace of faithfulness: to thank when He gives us certainties, but never to think that they are "my" certainties and always, to look beyond one's own certainties; the grace of being faithful even before the graves, before the collapse of many illusions. Loyalty, which always remains, but it is not easy to maintain it. That it is He, the Lord to guard it.

At your feet, O my Jesus, I bow down and offer you the repentance of my contrite heart that abysses itself into its nothingness and Your holy presence. I adore you in the Sacrament of Your love, ineffable Eucharist. I wish to receive you in the poor abode that my heart offers you. In anticipation of the happiness of sacramental communion, I want to possess you in spirit. Come to me, O my Jesus, that I come to you. May Your love inflame my whole being, for life and death. I believe in you, I hope in you, I love you. Amen.
Posted by Jesus Caritas Est at 8:57 AM