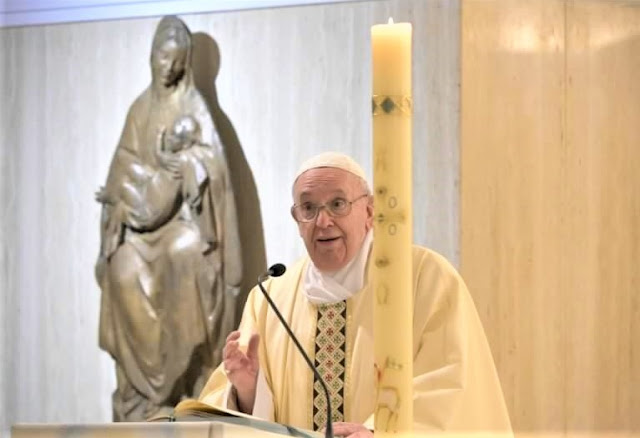 We pray today for teachers who have to work hard to take lessons via the internet and other media outlets and we also pray for students who have to take exams in a way they are not used to. Let us accompany them with prayer.

The sentence of this passage of the Gospel makes us think: «He said so to test him. For he knew what he was about to do "(Jn 6,6). This is what Jesus had in mind when he said to Philip: "Where can we buy bread for them to have food?". (Jn 6.5). But he said it to test him. He knew. Here we see the attitude of Jesus with the apostles. He continually tested them to teach them and, when they were out of the function they were to perform, he stopped them and taught them.

The Gospel is full of these gestures of Jesus to make his disciples grow and make them pastors of the people of God, in this case bishops: shepherds of the people of God. And one of the things that Jesus loved most was being with the crowd because this too is a symbol of the universality of redemption. And one of the things that the apostles no longer liked was the crowd because they liked being close to the Lord, feeling the Lord, hearing everything the Lord said. That day they went there to have a rest day - say the other versions in the other Gospels, because all four talk about it ... maybe there were two multiplications of the loaves - they came from a mission and the Lord said: "Let's go to rest a little bit ”(cf. Mk 6:31) and they went there. People noticed where they went to the sea, walked the shore and waited for them there. And the disciples were not happy because the crowd had ruined the "Easter Monday": they could not have this party with the Lord. Despite this, Jesus began to teach, they listened, then talked to each other ... And the hours, hours, hours passed ... Jesus spoke and people were happy. And they said, "Our party is ruined, our rest is ruined."

But the Lord sought closeness to people and sought to form the heart of shepherds to closeness with the people of God to serve them. And they understand this, they feel elected, they felt a little like a privileged circle, a privileged class, "an aristocracy", so to speak, close to the Lord, and many times the Lord made gestures to correct them. For example, let's think with children. They guarded the Lord: "No, no, no, do not approach children who harass, disturb ... No, children with parents". What about Jesus? "May the children come" (cf. Mk 10: 13-16). And they didn't understand. Then they understood. Then I think of the road to Jericho, the other one who shouted: "Jesus, son of David, have mercy on me!" (Lk 18:38). And these: "But shut up, shut up, the Lord passes by, don't disturb him." And Jesus says, “But who is that? Make him come ”(cf. Lk 18: 35-43). Another time the Lord [corrects them]. And so he taught them closeness to the people of God.

It is true that the people of God tired the shepherd, tired: when there is a good shepherd, things multiply, because people always go to the good shepherd for one reason, for the other. Once, a great parish priest of a simple, humble neighborhood of my diocese had the parsonage like a normal house, like the others, and people knocked on the door or knocked on the window, at any time ... and once he said to me: "But I would like to wall the door and the window to let me rest." But he realized that he was a shepherd and had to be with the people! And Jesus forms, teaches the disciples, the apostles this pastoral attitude which is closeness to the people of God. And the people of God are tired, because they always ask us for concrete things; he always asks you for something concrete, perhaps wrong, but he asks you for concrete things. And the pastor must take care of these things.

The versions of the other evangelists of this episode show that the hours have passed and the people had to leave because the darkness began, and they say thus: "Leave people to go and buy to eat", just in the dark, when the dark (cf. Lk 9: 12-13). But what did they have in mind? At least to have a little party among them, that not bad selfishness, but of course, to be with the shepherd, to be with Jesus who is the great shepherd. And Jesus answers, to test them: "Give them food to eat" (cf. v. 13). And this is what Jesus says to all the shepherds today: "Give them something to eat." “Are they distressed? Give him the consolation. Are they lost? Give him a way out. Did they get it wrong? Give him help to solve problems ... Give him, give him ... ". And the poor apostle feels that he must give, give, give ... But from whom does he receive? Jesus teaches us: from Himself from whom Jesus received. After this fact, he dismisses the apostles and goes to pray: from the Father, from prayer. This double closeness of the shepherd is what Jesus tries to make the apostles understand so that they become great shepherds.

But many times the crowd is wrong, and here it is wrong, isn't it? "Then the people, seeing the sign that he had made, said:" This is truly the prophet, the one who comes into the world! ". But knowing that they came to take him to make him king, he withdrew again "(Jn 6: 14-15). Maybe, maybe - but the Gospel does not say it - some of the apostles would have said to him: "But Lord, let's take advantage of this and take power". Another temptation. And Jesus shows them that that's not the way. The power of the pastor is service, he has no other power; and when he makes a mistake by taking on another power, his vocation is ruined and he becomes, I don't know, manager of "pastoral enterprises" but not a pastor. Structure does not make pastoral care: the pastor's heart is what pastoral care does. And the heart of the shepherd is what Jesus teaches us now.

Today we ask the Lord for the pastors of the Church because the Lord always speaks to them, because he loves them so much: you always talk to us, tell us how things are, explain and above all teach us not to be afraid of the people of God, not to be afraid of being close.

My Jesus, I believe you are truly present in the Blessed Sacrament of the Altar.
I love you above all things and I desire you in my soul.
Since I can't receive you sacramentally now,
come at least spiritually into my heart.
As already come, I embrace you and I join you all;
do not allow me to ever separate you from You.