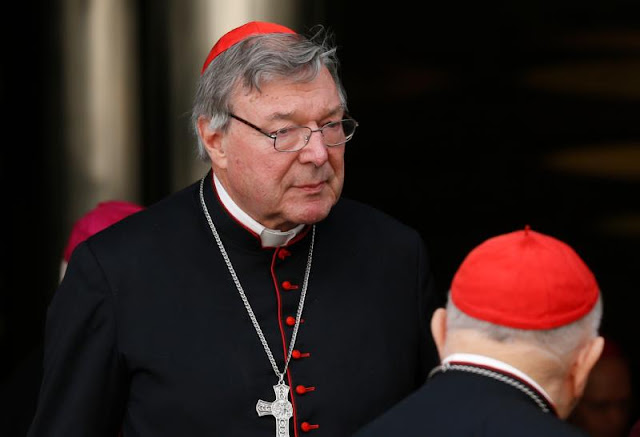 On Tuesday April 7, 2020 Australia's High Court announced their decision to overturn Cardinal Pell's conviction. They explained that the "evidence did not establish guilt to the requisite standard of proof". The High Court justices based their decision on the fact that the appellate court had failed to take into consideration whether there "remained a reasonable possibility that the offending had not taken place", leaving open "reasonable doubt" as to the Cardinal's guilt. The Cardinal has been in prison since the February 2019 guilty verdict was announced.
According to Vatican News Card. Pell left the prison and is reported to have been taken to a monastery in Melbourne. Cardinal Pell and the Holy released a statements which are available in Full Text below.
The Cardinal thanked everyone who has prayed for him, sent letters of support, his family, his "team of advisors", "friends and supporters here and overseas".. "I am praying for all those affected and our medical frontline personnel.", he said.
The Australian Bishops Conference, its President, Archbishop Mark Coleridge also issued a statement.  "Today's outcome will be welcome" by those who "believe in the Cardinal's innocence", and "devastating for others". "Many have suffered greatly through the process, which has now reached its conclusion", the Archbishop said. Archbishop Coleridge ended his statement reiterating the "Church’s unwavering commitment to child safety and to a just and compassionate response to survivors and victims of child sexual abuse".
(Edited from Vatican News)
STATEMENT OF THE HOLY SEE PRESS OFFICE

The Holy See, which has always expressed confidence in the Australian judicial authority, welcomes the High Court’s unanimous decision concerning Cardinal George Pell, acquitting him of the accusations of abuse of minors and overturning his sentence.

Entrusting his case to the court’s justice, Cardinal Pell has always maintained his innocence, and has waited for the truth to be ascertained.

At the same time, the Holy See reaffirms its commitment to preventing and pursuing all cases of abuse against minors.
http://press.vatican.va/content/salastampa/it/bollettino/pubblico/2020/04/07/0208/00464.html
STATEMENT FROM CARDINAL GEORGE PELL
I have consistently maintained my innocence while suffering from a serious injustice.
This has been remedied today with the High Court’s unanimous decision.
I look forward to reading the judgment and reasons for the decision in detail.
I hold no ill will toward my accuser, I do not want my acquittal to add to the hurt
and bitterness so many feel; there is certainly hurt and bitterness enough.
However my trial was not a referendum on the Catholic Church; nor a referendum on how
Church authorities in Australia dealt with the crime of paedophilia in the Church.
The point was whether I had committed these awful crimes, and I did not.
The only basis for long term healing is truth and the only basis for justice is truth, because
justice means truth for all.
A special thanks for all the prayers and thousands of letters of support.
I want to thank in particular my family for their love and support and what they had to go
through; my small team of advisors; those who spoke up for me and suffered as a
result; and all my friends and supporters here and overseas.
Also my deepest thanks and gratitude to my entire legal team for their unwavering resolve
to see justice prevail, to throw light on manufactured obscurity and to reveal the truth.
Finally, I am aware of the current health crisis. I am praying for all those affected and
our medical frontline personnel.
Cardinal George Pell
https://www.sydneycatholic.org/casys/wp-content/uploads/2020/04/STATEMENT-FROM-CARDINAL-GEORGE-PELL-070420.pdf
Posted by Jesus Caritas Est at 11:44 AM