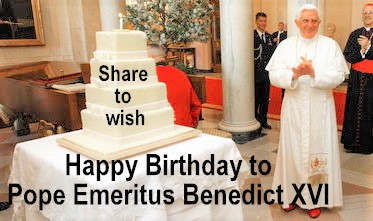 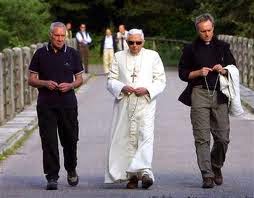 Joseph Aloisius Ratzinger was born on 16 April, Holy Saturday, 1927, in Marktl, Bavaria, Germany. He was baptised the same day. Pope Benedict XVI's brother, Georg Ratzinger, is a priest. His sister, Maria Ratzinger, who never married, managed Cardinal Ratzinger's household until her death in 1991. Benedict XVI is now Pope Emeritus of the Catholic Church. He was Pope from 2005 to 2013. Benedict XVI was elected on 19 April 2005 after the death of Pope John Paul II. He was ordained as a priest in 1951 in Bavaria, Germany. Benedict XVI currently lives in the Residence Mater Ecclesiae Monastery in the Vatican. His parents were Joseph Ratzinger, Sr. and Maria Ratzinger (born: Peintner)