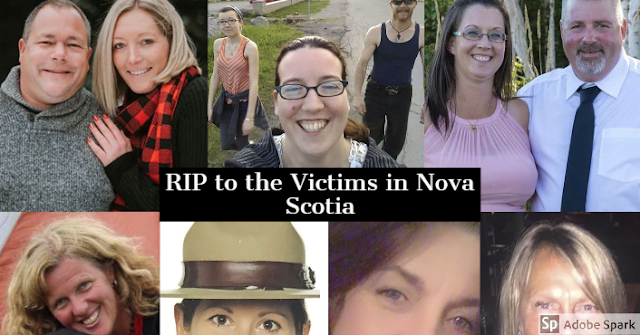 Nova Scotia, Canada has seen the death of 23 people during a mass shooting which occurred on Sunday, April 19, 2020. Archbishop Mancini of Nova Scotia has written a letter of condolence which can be found below. More victims are being found in the area where the attacker traveled and also burned homes.
The mass killing Victims include a 23-year female veteran of RCMP and 'a passionate teacher' from Debert Elementary School.  Const. A man went on a shooting spree across northern Nova Scotia in one of the deadliest killing sprees in Canadian history. According to CBC News, an elementary school teacher and an RCMP officer have been identified as among at least 23 victims who died in this weekend's shooting spree in rural Nova Scotia, one of the worst mass killings in Canadian history. Lisa McCully was a teacher at Debert Elementary School in Debert, the Nova Scotia Teachers Union said late Sunday.
Const. Kristen Beaton and Heather O'Brien, both nurses, were also killed by the gunman. A pregnant woman and her unborn child were killed as well as a 17-year old girl named Emily, with her parents. Heidi Stevenson was identified Sunday by the RCMP as the officer killed while responding to the call about an active shooter. She was a 23-year member of the RCMP and mother of two children, one in Grade 6 the other in Grade 8. Church Bells were rung in honor of the victims - see video below:

The RCMP said all the victims appear to have been killed by 51-year-old Gabriel Wortman, a denturist, (pictured left) who at one point wore a police uniform and drove a mock-up police cruiser as he went on a rampage throughout a part of rural Nova Scotia. The first reports of an active shooter came late Saturday from Portapique, a community about 40 kilometres west of Truro. Police said Sunday night the suspected shooter was killed after being intercepted by officers in Enfield, N.S.
Heidi Stevenson is being remembered as a good neighbour, colleague and friend by Staff Sgt. Scott MacDonald with the Halifax Regional Police.
Another RCMP officer was injured while responding to the call. He is recovering in hospital.A sign of condolence was posted Sunday on a Portapique telephone pole by Dave Brown, who lives in the community. Between images of two broken hearts was the message: "Our thoughts and prayers are with you and the community." "It's still unbelievable," he said.
(Edited from CBC News)
Please pray for the victims of this terrible tragedy....Archbishop Mancini offers a Message of Condolence
April 20, 2020
Commissioner Brenda Lucki, Commissioner of the RCMP
And all those affected by this tragedy,
I wish to express on my behalf, as Archbishop of Halifax-Yarmouth, and in the name of Catholic faithful, our sincere condolences on the loss of life of Constable Heidi Stevenson. Her death in the line of duty, indicates the highest sacrifice that one can make on behalf of the citizens she served.
Our prayers go out to all the members of her family, particularly her children, and to the fellow officers of her RCMP family, who mourn the loss of her life.
Such a tragic event, involving the meaningless death of so many of our fellow citizens has shocked us all, adding more collective suffering to an already tragic time in our province, our country and in our personal lives. I offer my deepest sympathies to the families and friends of all the victims and pray that they find some consolation in the expressions of love and caring being shown to them in their time of sadness and grief.
As a faith leader in the Christian tradition, it is possible to offer some support with the tenant of our faith, the heart of the Easter message, that life carries on beyond death.
I share these consoling words as our prayer for all who have been touched by these recent events and as an expression of our solidarity with all Nova Scotians. Sincerely in Christ,
†Anthony Mancini
Archbishop of Halifax-Yarmouth
Source of Letter: https://www.halifaxyarmouth.org/archbishops/letters-videos-to-the-faithful/item/archbishop-mancini-offers-a-message-of-condolence