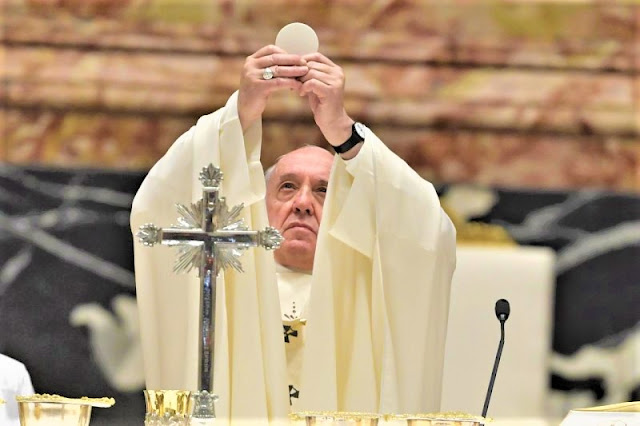 Pope Francis LIVE streamed from the Vatican on Holy Thursday Mass of the Lord's Supper.
Full Text Homily and Full Video below:
On Holy Thursday, the Pope will preside at the Chrism Mass at a later date. The Mass in Coena Domini (of the Lord’s Supper), which commemorates the institution of the Eucharist, at the Altar of the Chair in St. Peter’s Basilica. It did not include the traditional washing of the feet which can, in any case, be omitted.
HOLY MASS IN COENA DOMINI

The Eucharist, the service, the anointing.

The reality we live today in this celebration: the Lord who wants to stay with us in the Eucharist. And we always become tabernacles of the Lord, we bring the Lord with us; to the point that he himself tells us that if we do not eat his body and drink his blood, we will not enter the Kingdom of Heaven. This is the mystery of the bread and wine of the Lord with us, in us, within us.

And the priesthood. Today I would like to be close to priests, to all priests, from the last ordained to the Pope. We are all priests. The bishops, all ... We are anointed, anointed by the Lord; anointed to celebrate the Eucharist, anointed to serve.

Today there is no Chrism Mass - I hope we can celebrate it before Pentecost, otherwise we will have to postpone it until next year - but I cannot let this Mass pass without remembering the priests. Priests who offer their lives for the Lord, priests who are servants. In these days more than sixty have died here, in Italy, in the attention to the sick in hospitals, and also with doctors, nurses, nurses ... They are "the saints next door", priests who gave their lives by serving . And I think of those who are far away. Today I received a letter from a priest, chaplain from a distant prison, which tells how he lives this Holy Week with the prisoners. A Franciscan. Priests who go far to bring the Gospel and die there. A bishop said that the first thing he did, when he arrived in these mission posts, was to go to the cemetery, to the grave of the priests who left their lives there, young, for the local plague [local diseases]: they were not prepared, they had no antibodies, them. Nobody knows their names: anonymous priests. The country parish priests, who are parish priests of four, five, seven villages, in the mountains, and go from one to the other, who know the people ... Once, one told me that he knew the name of all the people of the countries. "Really?" I said to him. And he said to me: "Even the name of the dogs!". They all know. Priestly closeness. Well done, good priests.

Today I carry you in my heart and I bring you to the altar. Slandered priests. Many times it happens today, they cannot go to the street because they say bad things to them, in reference to the drama we experienced with the discovery of the priests who did bad things. Some told me that they cannot leave the house with the clergyman because they insult them; and they continue. Sinful priests, who together with the bishops and the sinner Pope do not forget to ask for forgiveness, and learn to forgive, because they know that they need to ask for forgiveness and to forgive. We are all sinners. Priests who suffer from crises, who do not know what to do, are in the dark ...

Today all of you, brother priests, are with me on the altar, you, consecrated persons. I only tell you one thing: don't be as stubborn as Peter. Let your feet be washed. The Lord is your servant, He is close to you to give you strength, to wash your feet.

And so, with this awareness of the need to be washed, be great forgivers! Forgive! Big heart of generosity in forgiveness. It is the measure by which we will be measured. As you have forgiven, you will be forgiven: the same measure. Don't be afraid to forgive. Sometimes there are doubts ... Look at the Christ [look at the Crucifix]. There is everyone's forgiveness there. Be brave; also in risking, in forgiving, in order to console. And if you cannot give sacramental forgiveness at that moment, at least give the consolation of a brother who accompanies and leaves the door open for [that person] to return.

“I thank God for you, priests. Jesus loves you. I ask only that you allow your feet to be washed.”  Follow along with the Prayer booklet from the Vatican:
http://www.vatican.va/news_services/liturgy/libretti/2020/20200409-libretto-messa-in-cena-domini.pdf