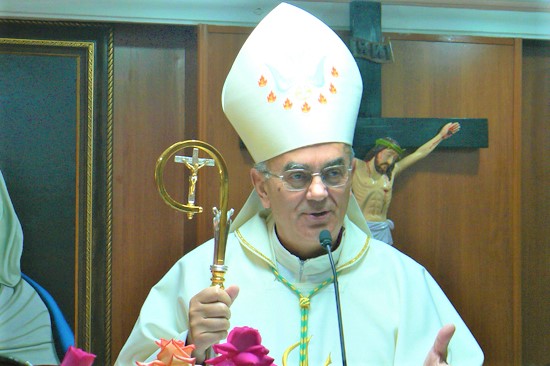 ASIA/BAHRAIN - Apostolic Vicar of Northern Arabia, Bishop Camillo Ballin passes away, missionary in the lands of Islam
Tuesday, 14 April 2020
Rome (Agenzia Fides) - "Beloved Bishop Camillo Ballin passed away in Rome". This is how the Bahraini media reported the death of Combonian Camillo Ballin, Apostolic Vicar of northern Arabia, who died of cancer at almost 76 years of age on April 12, Easter Sunday, in the Roman hospital where he was hospitalized.
Camillo Ballin had dedicated his life as a missionary and then as a bishop at the service of the Christian communities present in Arab countries with a Muslim majority. Born in Fontaniva (province of Padua, diocese of Vicenza) on June 24, 1944, he entered the Seminary in Vicenza first and then, in 1963, he entered the novitiate of the Religious Institute of the Comboni Missionaries of the Heart of Jesus (MCCJ) founded by San Daniele Comboni, where he made his perpetual profession on 9 September 1968. On 30 March 1969 he received his priestly ordination. After his ordination, in 1970, he learned Arabic in Lebanon and Syria, and from 1971 to 1977 started his priestly apostolate in the Latin parish of St Joseph in Zamalek, Cairo and was then appointed parish priest. From 1977 to 1980 he moved to Lebanon and then to Rome for study reasons, obtaining a licentiate in Eastern liturgy at the Pontifical Oriental Institute. From 1981 to 1990, he was a professor at the Institute of Theology in Cairo and Delegation Superior and Provincial Superior of his religious congregation in Egypt. In 1990, he was assigned to the province of Sudan where he opened a Training Institute for the Formation of Religion Teachers in schools (1990-1997).
From 1997 till 2000, he was in Rome for his doctorate on the Church history of Sudan especially in the Mahdiyyah time (1881-1898 - during that period, the practice of any other religion, except the Mahdist Islam, was strictly forbidden) His research was on how Christians and Jews lived in those years of persecution.
Since 2000, he has been director of the Dar Comboni Center of Arab and Islamic Studies in Cairo, Egypt and professor of Church History in the Inter-Rite Major Seminary.
July 14, 2005, Pope Benedict XVI appointed Bishop Ballin as the Vicar Apostolic of Kuwait, with the episcopal title of the seat of Arna. On September 2, 2005, in the cathedral of Kuwait City dedicated to the Holy Family, Ballin was consecrated bishop by Cardinal Crescenzio Sepe, at that time Prefect of the Congregation of Propaganda Fide. Then, on May 31, 2011, Pope Benedict XVI appointed him the first Apostolic Vicar of northern Arabia. He oversaw the territories of Kuwait, Bahrain, Qatar and Saudi Arabia.
In the last fifteen years, Bishop Ballin had served with apostolic realism and perspicacity the many communities of baptized Catholics - two and a half million, of whom one and a half million in Saudi Arabia, without churches - who arrived in his Apostolic Vicariate following the flows of immigration for work and from dozens of different countries, starting with India and the Philippines. A multilingual and multicolored Christianity, which increased without the contribution of any missionary strategy of evangelization, born from vital and concrete interests that pushed millions of people to leave their homelands and look for a decent salary. The effect - unexpected and not sought - is that in the Arabian Peninsula there have never been as many Christians as now (after the centuries of hiding following the first, exciting missionary progression, carried out by the ancient Church of the East, of Nestorian ancestry).
The Venetian Ballin had obtained the Bahrain passport to be able to travel freely in all the territories of the Vicariate. When he felt ill, more than a month ago, he was in Saudi Arabia, and from there he was taken to Rome.
In his public speeches, even answering questions that aimed to emphasize oppositions between Christianity and Islam, Bishop Ballin recognized that in the countries included in the Vicariate entrusted to him "there are no ongoing persecutions", he reported that he had never tried to convert an Islamist to Christianity, and he remembered that even in those lands mission consists "in imitating Jesus".
The intensity of the gaze of faith with which he looked at the events of Christians of the Arabian Peninsula had also surfaced in the words entrusted to him by Agenzia Fides (see Fides, 5/3/2016) on the occasion of the martyrdom of the four Missionary Sisters of Charity slaughtered on March 4, 2016 in Yemen by the command of terrorists who attacked a nursing home in the city of Aden that day, slaughtering 12 other people together with the religious women.
On that occasion, Bishop Ballin had looked at the massacre in Yemen in the light of the martyrdom experience that accompanies the whole history of the Church in its walk in history. "The closer the Church is to Jesus - the Apostolic Vicar of northern Arabia told Fides - the more closely she shares in his passion”. The massacre by a group of armed men committed inside a Home for elderly and disabled persons entrusted to the care of the Sisters of Mother Teresa is “a sign that the Congregation is very close to Jesus Christ, because the nearer a person comes to Jesus Christ the more they come close to his cross. No Christian who is far from Christ will never be touched by persecution, whereas the Christian who comes close to Christ becomes involved in his passion and death and will be close to him in the glory of his victory". (GV) (Agenzia Fides, 14/4/2020)