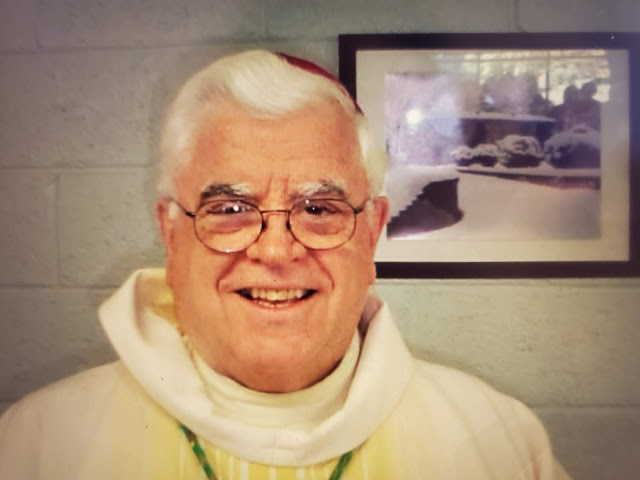 The Boston Pilot reports:
Most Reverend Emilio S. Allué, retired Auxiliary Bishop of Boston passed to the Lord April 26. He was 85 years old.

In an email to Boston priests, Vicar General and Moderator of the Curia Bishop Peter Uglietto announced the death and said he had been critically ill in recent weeks. Since mid-April Cardinal Seán P. O'Malley had been publicly urging prayers for Bishop Allué, saying the bishop was seriously ill with COVID-19.

Born in Huesca, Spain on Feb. 18, 1935, his education began at home and was continued more formally at schools directed by the Salesians of St. John Bosco, whose novitiate he entered in 1954 in his native Spain.

He was assigned to the New York-based province of his order, and in 1959 he graduated from the order's seminary college in Newton, New Jersey. Sent to Italy, he completed theological studies at Turin, the Salesian birthplace and in Rome, where he was ordained to the priesthood Dec. 22, 1966. He completed doctoral studies in the Eternal City, receiving the Doctorate in Sacred Theology (STD) in 1969.

Returning to the United States, he became a U.S. citizen in 1974 and completed a second doctorate, this one from Fordham University in 1981 specializing in the history of Christianity.

Between 1981 and his appointment in 1996 as auxiliary of the archdiocese, he served in various pastoral and educational assignments: Rector of Salesian Minor Seminary, Goshen, New York; pastor of Our Lady of Mount Carmel, New Brunswick, New Jersey; pastor of St. Kieran, Miami, Florida; Rector of the Marian Shrine, Haverstraw, New York and as parochial vicar at Mary Help of Christians, on Manhattan's Lower East Side.

Pope St. John Paul II tapped him to be titular bishop of the titular see of Croe in Albania on July 24, 1996. He was ordained to the episcopate by Cardinal New York Law, together with his episcopal "twin" the late Bishop Francis X. Irwin, at the Cathedral of the Holy Cross on Sept. 17, 1996.

He served as regional bishop of both the West Region (1996-2000) and the Merrimack Region (2000-2010). He also served as episcopal moderator of the Archdiocesan Hispanic Apostolate (2008-2010) during his time as auxiliary bishop.

He retired as auxiliary bishop on June 30, 2010 and remained in residence at St. Theresa of Avila Rectory, West Roxbury (2008-2018). He served as a valued collaborator of then-pastor Msgr. William M. Helmick, until they both moved to Regina Cleri Residence in late 2018.
FULL TEXT Source: The Boston Pilot.com - Image Screenshot Infoans.org