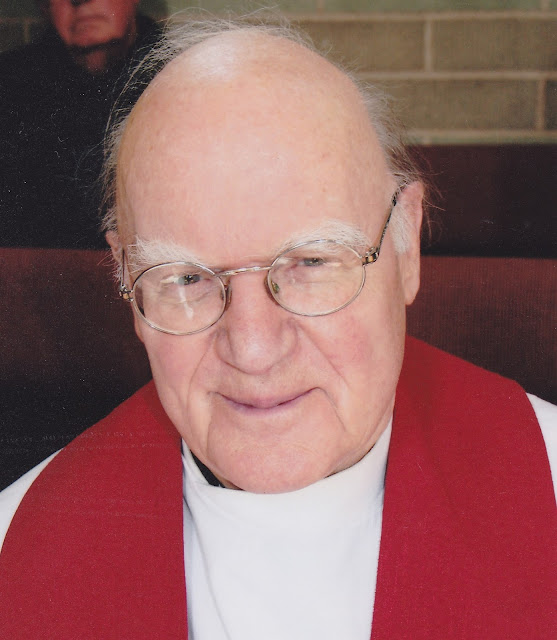 Fr. Alphonse Anthony Maria de Valk, CSB
MARCH 27, 1932 – APRIL 16, 2020 Peacefully at Scarborough General Hospital on April 16, 2020. Fr. Alphonse was born in Rotterdam, Netherlands, on March 27, 1932. He was predeceased by his parents Martien and Christina Lutkie, and by his brothers Matthew, Charles, Neil and Peter. He is survived by his sisters-in-law Mary Joan and Patricia. He entered the Congregation of St. Basil and was professed in 1962. After studies in Toronto at the University of St. Michael’s College and St. Basil’s Seminary he was ordained a priest in 1965. Subsequently, his priestly ministry was mostly as a teacher at St. Thomas More College (Saskatoon) and St. Joseph’s College (Edmonton). Fr. Alphonse was very active with Campaign Life and was editor of Catholic Insight magazine. In 1985 he was assigned to live at Soulerin House at St. Michael’s College School (Toronto). In November 2018 Fr. Alphonse moved with the Basilian Fathers’ Retirement Community to Presentation Manor (Scarborough). In light of the current pandemic, there will be a Funeral Mass for Fr. de Valk at a later date. Burial will be at the Basilian plot at Holy Cross Cemetery, Thornhill, ON. In lieu of flowers, contributions can be made to the Basilian Fathers Retirement Fund, 95 St. Joseph Street, Toronto, ON M5S 3C2.

Fr. De Valk was also the founder and former editor of both the Interim and Catholic Insight magazines, which he began in 1993 to instill culture and hope.
He is quoted as saying:

“Being a priest is a tremendous vocation. It allows you to do so many things for people but always to live on the highest possible level of ideals. It certainly means serving the Lord in the world and for me the intellectual apostolate of teaching, growing in study and doing the will of God. To be a priest is to preside at the liturgy, to teach the faith and to do everything that Christ did as a Priest.”
Quotation Source: http://www.theinterim.com/features/profiles/%E2%80%98he%E2%80%99d-do-it-again-too%E2%80%99-fr-alphonse-de-valk-25-years-a-priest/
Obituary source: https://www.dignitymemorial.com/obituaries/toronto-on/fr-alphonse-de-valk-csb-9137008
Posted by Jesus Caritas Est at 4:37 PM

He will be greatly missed. He was for years our guiding light,to me he was a teacher of the Faith and a guide for my spiritual development. He understood the connection between faith,morals and politics perfectly. He was a great priest and a great man! I shall miss him very much .Eternal Rest Grant him ,oLord,and May perpetual light shine on him.Amen!����✝️❤️Mrs.Anneliese Steden.