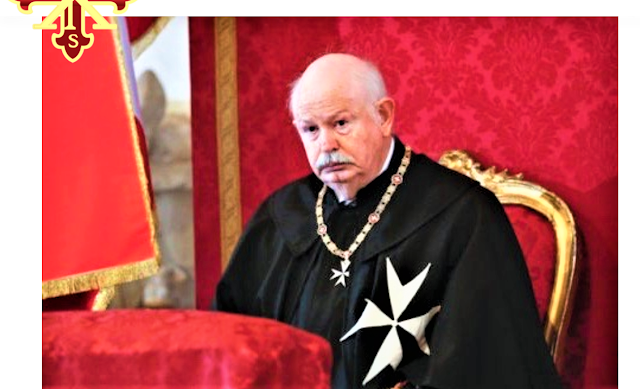 Fra’ Giacomo Dalla Torre del Tempio di Sanguinetto was born in Rome on 9 December 1944. He graduated in Literature and Philosophy from the Sapienza University of Rome, specializing in Christian archaeology and art history. He held academic positions in the Pontifical Urbaniana University, teaching classical Greek, and also served as chief librarian and archivist for the university’s important collections. He has published a range of academic articles and essays on aspects of mediaeval art history.

Admitted to the Sovereign Order in 1985 as Knight of Honour and Devotion, Fra’ Giacomo Dalla Torre del Tempio di Sanguinetto took his solemn vows in 1993. From 1994 to 1999 he was Grand Prior of Lombardy and Venice and from 1999 to 2004 a member of the Sovereign Council. He was elected Grand Commander at the Chapter General of 2004 and on the death of the 78th Grand Master, Fra’ Andrew Bertie, in February 2008 he became Lieutenant ad interim. From 2008 to 2017 Fra’ Giacomo Dalla Torre held the position of Grand Prior of Rome. Upon the resignation of the 79th Grand Master, Fra’ Matthew Festing, the Council Complete of State of 29 April 2017 elected him Lieutenant of the Grand Master for a year. In the subsequent Council Complete of State of 2 May 2018 he was elected 80th Prince and Grand Master of the Sovereign Order of Malta.

A man of great spirituality and human warmth, Fra’ Giacomo Dalla Torre del Tempio di Sanguinetto always personally assisted the disadvantaged, serving meals to rough sleepers in the Termini and Tiburtina railways stations in Rome. He participated in numerous Order of Malta international pilgrimages to Lourdes and national ones to Loreto and Assisi. He showed great joy in taking part in the Order’s international summer camps for young disabled people where he was greeted with great affection by the young volunteers and guests.

As Grand Master, Fra’ Giacomo Dalla Torre carried out numerous official and state journeys. Only last January he made a state visit to Benin and in July last to Cameroon. More recently, he travelled to Germany, Slovenia and Bulgaria for meetings with their respective authorities. During these journeys he always made a point of visiting the Order’s social-health facilities to greet personally both the staff and the patients.

A marked humanity and a profound dedication to charitable works have always inspired the 80th Grand Master of the Sovereign Order of Malta, who will be remembered by all who knew him for his human qualities and his cordial and affectionate manner.
Source: http://www.orderofmalta.int/2020/04/29/grand-magistry-announces-death-of-grand-master-fra-giacomo-dalla-torre-del-tempio-di-sanguinetto/
Image Source: https://ordenconstantiniana.org/fra-giacomo-dalla-torre-del-tempio-di-sanguinetto-elected-the-80th-grand-master-of-the-sovereign-order-of-malta/?lang=en
Posted by Jesus Caritas Est at 10:26 AM