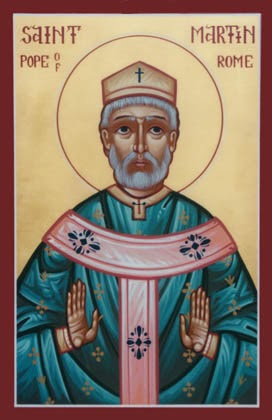 Born:
Todi, Tuscany, Italy
Died:
655 at Cherson, Crimea
Martyr, born at Todi on the Tiber, son of Fabricius; elected Pope at Rome, 21 July, 649, to succeed Theodore I; died at Cherson in the present peninsulas of Krym, 16 Sept., 655, after a reign of 6 years, one month and twenty six days, having ordained eleven priests, five deacons and thirty-three bishops. 5 July is the date commonly given for his election, but 21 July (given by Lobkowitz, "Statistik der Papste" Freiburg, 1905) seems to correspond better with the date of his death and reign (Duchesne "Lib. Pont.", I, 336); his feast is on 12 November.The Greeks honor him on 13 April and 15 September, the Muscovites on 14 April. In the hymns of the Office the Greeks style him infallibilis fidei magister because he was the successor of St. Peter in the See of Rome (Nilles, "Calendarium Manuale", Innsbruck, 1896, I, 336).

Martin, one of the noblest figures in a long line of Roman pontiffs (Hodgkin, "Italy", VI, 268) was, according to his biographer Theodore (Mai, "Spicil. Rom.", IV 293) of noble birth, a great student, of commanding intelligence, of profound learning, and of great charity to the poor. Piazza, II  45 7 states that he belonged to the order of St. Basil. He governed the Church at a time when the leaders of the Monothelite heresy, supported by the emperor, were making most strenuous efforts to spread their tenets in the East and West. Pope Theodore had sent Martin as apocrysiary to Constantinople to make arrangements for canonical deposition of the heretical patriarch, Pyrrhus. After his election, Martin had himself consecrated without waiting for the imperial confirmation, and soon called a council in the Lateran at which one hundred and five bishops met. Five sessions were held on 5, 8, 17, 119 and 31 Oct., 649 (Hefele, "Conciliengeschichte", III, 190). The "Ecthesis" of Heraclius and the "Typus" of Constans II were rejected; nominal excommunication was passed against Sergius, Pyrrus, and Paul of Constantinople, Cyrus of Alexandria and Theodore of Phran in Arabia; twenty canons were enacted defining the Catholic doctrine on the two wills of Christ. The decrees signed by the pope and the assembled bishops were sent to the other bishops and the faithful of the world together with an encyclical of Martin. The Acts with a Greek translation were also sent to the Emperor Constans II.
The pope appointed John, Bishop of Philadelphia, as his vicar in the East with necessary instructions and full authority . Bishop Paul of Thessalonica refused to recall his heretical letters previously sent to Rome and added others,—he was, therefore, formally excommunicated and deposed. The Patriarch of Constantinople, Paul, had urged the emperor to use drastic means to force the pope and the Western Bishops at least to subscribe to the "Typus". The emperor sent Olympius as exarch to Italy, where he arrived while the council was still in session. Olympius tried to create a faction among the fathers to favor the views of the emperor, but without success. Then upon pretense of reconciliation he wished to receive Holy Communion from the hands of the pontiff with the intention of slaying him. But Divine Providence protected the pope, and Olympius left Rome to fight against the Saracens in Sicily and died there. Constans II thwarted in his plans, sent as exarch Theodore Calliopas with orders to bring Martin to Constantinople. Calliopas arrived in Rome, 15 June, 653, and, entering the Lateran Basilica two days later, informed the clergy that Martin had been deposed as an unworthy intruder, that he must be brought to Constantinople and that another was to be chosen in his place. The pope, wishing to avoid the shedding of human blood, forbade resistance and declared himself willing to be brought before the emperor. The saintly prisoner, accompanied by only a few attendants, and suffering much from bodily ailments and privations, arrived at Constantinople on 17 Sept., 653 or 654, having landed nowhere except the island of Naxos. The letters of the pope seem to indicate he was kept at Naxos for a year. Jaffe, n. 1608, and Ewald, n 2079, consider the annum fecimus an interpolation and would allow only a very short stop at Naxos, which granted the pope an opportunity to enjoy a bath. Duchesne, "Lib. Pont.", I, 336 can see no reason for abandoning the original account; Hefele,"Conciliengeschichte" III, 212, held the same view (see "Zeitschr. für Kath. Theol.", 1892, XVI, 375).
From Abydos messengers were sent to the imperial city to announce the arrival of the prisoner who was branded as a heretic and rebel, an enemy of God and of the State. Upon his arrival in Constantinople Martin was left for several hours on deck exposed to the jests and insults of a curious crowd of spectators. Towards evening he was brought to a prison called Prandearia and kept in close and cruel confinement for ninety-three days, suffering from hunger, cold and thirst. All this did not break his energy and on 19 December he was brought before the assembled senate where the imperial treasurer acted as judge. Various political charges were made, but the true and only charge was the pope's refusal to sign the "Typus". He was then carried to an open space in full view of the emperor and of a large crowd of people. These were asked to pass anathema upon the pope to which but few responded. Numberless indignities were heaped upon him, he was stripped of nearly all his clothing, loaded with chains, dragged through the streets of the city and then again thrown into the prison of Diomede, where he remained for eighty five days. Perhaps influenced by the death of Paul, Patriarch of Constantinople, Constans did not sentence the pope to death, but to exile. He was put on board a ship, 26 March, 654 (655) and arrived at his destination on 15 May. Cherson was at the time suffering from a great famine. The venerable pontiff here passed the remaining days of his life. He was buried in the church of Our Lady, called Blachernæ, near Cherson, and many miracles are related as wrought by St Martin in life and after death. The greater part of his relics are said to have been transferred to Rome, where they repose in the church of San Martino ai Monti. Of his letters seventeen are extant in P.L., LXXXVII, 119.