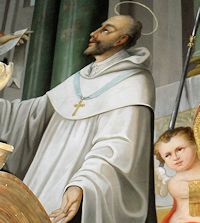 Feast Day:
April 17
Born:
Dorset, England
Died:
28 March 1134
Major Shrine:
Church of St. Stephen Harding in Apátistvánfalva, Hungary, district of Szentgotthárd.
Confessor, the third Abbot of Citeaux, was born at Sherborne in Dorsetshire, England, about the middle of the eleventh century; died 28 March, 1134. He received his early education in the monastery of Sherborne and afterwards studied in Paris and Rome. On returning from the latter city he stopped at the monastery of Molesme and, being much impressed by the holiness of St. Robert, the abbot, joined that community. Here he practised great austerities, became one of St. Robert's chief supporters and was one of the band of twenty-one monks who, by authority of Hugh, Archbishop of Lyons, retired to Citeaux to institute a reform in the new foundation there. When St. Robert was recalled to Molesme (1099), Stephen became prior of Citeaux under Alberic, the new abbot. On Alberic's death (1110) Stephen, who was absent from the monastery at the time, was elected abbot. The number of monks was now very reduced, as no new members had come to fill the places of those who had died. Stephen, however, insisted on retaining the strict observance originally instituted and, having offended the Duke of Burgundy, Citeau's great patron, by forbidding him or his family to enter the cloister, was even forced to beg alms from door to door. It seemed as if the foundation were doomed to die out when (1112) St. Bernard with thirty companions joined the community. This proved the beginning of extraordinary prosperity. The next year Stephen founded his first colony at La Ferte, and before is death he had established thirteen monasteries in all. His powers as an organizer were exceptional, he instituted the system of general chapters and regular visitations and, to ensure uniformity in all his foundations, drew up the famous "Charter of Charity" or collection of statues for the government of all monasteries united to Citeaux, which was approved by Pope Callistus II in 1119 (see CISTERCIANS). In 1133 Stephen, being now old, infirm, and almost blind, resigned the post of abbot, designating as his successor Robert de Monte, who was accordingly elected by the monks. The saint's choice, however, proved unfortunate and the new abbot only held office for two years. Stephen was buried in the tomb of Alberic, his predecessor, in the cloister of Citeaux. In the Roman calendar his feast is 17 April, but the Cistercians themselves keep it on 15 July, with an octave, regarding him as the true founder of the order. Besides the "Carta Caritatis" he is commonly credited with the authorship of the "Exordium Cisterciencis cenobii", which however may not be his. Two of his sermons are preserved and also two letters (Nos. 45 and 49) in the "Epp. S. Bernardi". Catholic Encyclopedia