Saint April 2 : St. Francis of Paola who had the Gift of Prophecy and Founder of the Order of Minims 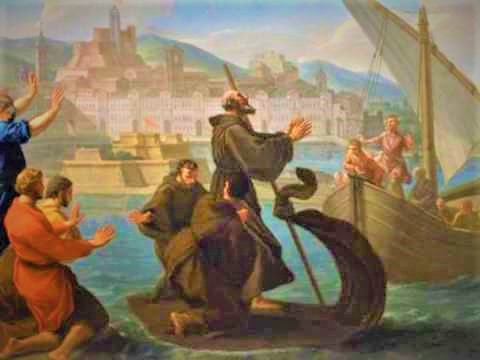 1512 by Pope Julius II
Founder of the Order of Minims; b. in 1416, at Paula, in Calabria, Italy; d. 2 April, 1507, at Plessis, France. His parents were remarkable for the holiness of their lives. Remaining childless for some years after their marriage they had recourse to prayer, especially commending themselves to the intercession of St. Francis of Assisi. Three children were eventually born to them, eldest of whom was Francis. When still in the cradle he suffered from a swelling which endangered the sight of one of his eyes. His parents again had recourse to Francis of Assisi, and made a vow that their son should pass an entire year in the "little habit" of St Francis in one of the convents of his order, a not uncommon practice in the Middle Ages. The child was immediately cured. From his early years Francis showed signs of extraordinary sanctity, and at the age of thirteen, being admonished by a vision of a Franciscan friar, he entered a convent of the Franciscan Order in order to fulfil the vow made by his parents. Here he gave great edification by his love of prayer and mortification, his profound humility, and his prompt obedience. At the completion of the year he went with his parents on a pilgrimage to Assisi, Rome, and other places of devotion. Returning to Paula he selected a retired spot on his father's estate, and there lived in solitude; but later on he found a more retired dwelling in a cave on the sea coast. Here he remained alone for about six years giving himself to prayer and mortification. In 1435 two companions joined him in his retreat, and to accommodate them Francis caused three cells and a chapel to be built: in this way the new order was begun. The number of his disciples gradually increased, and about 1454, with the permission of Pyrrhus, Archbishop of Cosenza, Francis built a large monastery and church. The building of this monastery was the occasion of a great outburst of enthusiasm and devotion on the part of the people towards Francis: even the nobles carried stones and joined in the work. Their devotion was increased by the many miracles which the saint wrought in answer to their prayers. The rule of life adopted by Francis and his religious was one of extraordinary severity. They observed perpetual abstinence and lived in great poverty, but the distinguishing mark of the order was humility. They were to seek to live unknown and hidden from the world. To express this character which he would have his disciples cultivate, Francis eventually obtained from the Holy See that they should be styled Minims, the least of all religious. In 1474 Sixtus IV gave him permission to write a rule for his community, and to assume the title of Hermits of St. Francis: this rule was formally approved by Alexander VI, who, however, changed their title into that of Minims. After the approbation of the order, Francis founded several new monasteries in Calabria and Sicily. He also established convents of nuns, and a third order for people living in the world, after the example of St. Francis of Assisi. He had an extraordinary gift of prophecy: thus he foretold the capture of Otranto by the Turks in 1480, and its subsequent recovery by the King of Naples. Also he was gifted with discernment of consciences. He was no respecter of persons of whatever rank or position. He rebuked the King of Naples for his ill-doing and in consequence suffered much persecution. When Louis XI was in his last illness he sent an embassy to Calabria to beg the saint to visit him. Francis refused to come nor could he be prevailed upon until the pope ordered him to go. He then went to the king at Plessis-les-Tours and was with him at his death. Charles VIII, Louis's successor, much admired the saint and during his reign kept him near the court and frequently consulted him. This king built a monastery for Minims at Plessis and another at Rome on the Pincian Hill. The regard in which Charles VIII held the saint was shared by Louis XII, who succeeded to the throne in 1498. Francis was now anxious to return to Italy, but the king would not permit him, not wishing to lose his counsels and direction. The last three months of his life he spent in entire solitude, preparing for death. On Maundy Thursday he gathered his community around him and exhorted them especially to have mutual charity amongst themselves and to maintain the rigour of their life and in particular perpetual abstinence. The next day, Good Friday, he again called them together and gave them his last instructions and appointed a vicar-general. He then received the last sacraments and asked to have the Passion according to St. John read out to him, and whilst this was being read, his soul passed away. Leo X canonized him in 1519. In 1562 the Huguenots broke open his tomb and found his body incorrupt. They dragged it forth and burnt it, but some of the bones were preserved by the Catholics and enshrined in various churches of his order. The Order of Minims does not seem at any time to have been very extensive, but they had houses in many countries. The definitive rule was approved in 1506 by Julius II, who also approved a rule for the nuns of the order. The feast of St. Francis of Paula is kept by the universal Church on 2 April, the day on which he died. The Catholic Encyclopedia