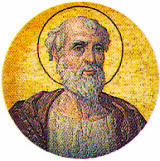 Born:
Rome, Italy
Died:
25 October 304 at Rome, Italy
He succeeded St. Caius in the bishopric of Rome, in 296, about the time that Diocletian set himself up for a deity and impiously claimed divine honours. Theodoret says that in those stormy times of persecution Marcellinus acquired great glory. He sat in St. Peter's chair eight years, three months, and twenty-five days, dying in 304, a year after the cruel persecution broke out, in which he gained much honour. He has been styled a martyr, though his blood was not shed in the cause of religion, as appears from the Liberian Calendar, which places him among those popes that were not put to death for the faith. =It is a fundamental maxim of the Christian morality, and a truth which Christ has established in the clearest terms and in innumerable passages of the gospel, that the cross, or sufferings and mortifications, are the road to eternal bliss. They, therefore, who lead not here a crucified and mortified life are unworthy ever to possess the unspeakable joys of his kingdom. Our Lord himself, our model and our head, walked in this path, and his great apostle puts us in mind that he entered into bliss only by his blood and by the cross. Nevertheless, this is a truth which the world can never understand, how clearly soever it be preached by Christ and recommended by his powerful example and that of his martyrs and of all the saints. Christians still pretend, by the joys and pleasures of this world, to attain to the bliss of heaven, and shudder at the very mention of mortification, penance, or sufferings. So prevalent is this fatal error, which self-love and the example and false maxims of the world strongly fortify in the minds of many, that those who have given themselves to God with the greatest fervour are bound always to stand upon their guard against it, and daily to renew their fervour in the love and practice of penance, and to arm themselves with patience against sufferings, lest the weight of the corruption of our nature, the pleasures of sense, and flattering blandishments of the world, draw them aside and make them leave the path of mortification, or lose courage under its labours, and under the afflictions with which God is pleased to purify them and afford them means of sanctifying themselves. SOURCE: History of the Christian Church