Saint April 5 : St. Vincent Ferrer a Dominican who was known for Prophecy and Patron of Builders, construction workers, Plumbers 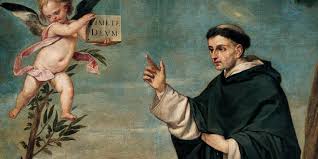 Famous Dominican missionary, born at Valencia, 23 January, 1350; died at Vannes, Brittany, 5 April, 1419. He was descended from the younger of two brothers who were knighted for their valour in the conquest of Valencia, 1238. In 1340 Vincent's father, William Ferrer, married Constantia Miguel, whose family had likewise been ennobled during the conquest of Valencia. Vincent was their fourth child. A brother, not unknown to history, was Boniface Ferrer, General of the Carthusians, who was employed by the antipope Benedict XIII in important diplomatic missions. Vincent was educated at Valencia, and completed his philosophy at the age of fourteen. In 1367 he entered the Dominican Order, and was sent to the house of studies at Barcelona the following year. In 1370 he taught philosophy at Lérida; one of his pupils there was Pierre Fouloup, later Grand Inquisitor of Aragon. In 1373 Vincent returned to the Dominican "Studium arabicum et hebraicum" at Barcelona. During his stay there famine was prevalent; filled with compassion for the sufferers; Vincent foretold, while preaching one day, the near approach of ships bearing wheat. His prediction was fulfilled. In 1377 he was sent to continue his studies at Toulouse, where, in his own words, "study followed prayer, and prayer succeeded study". In 1379 Vincent was retained by Cardinal Pedro de Luna, legate of the Court of Aragon, who was endeavouring to win King Peter IV to the obedience of Avignon. The saint, thoroughly convinced of the legitimacy of the claims of the Avignon pontiffs, was one of their strongest champions. From 1385 to 1390 he taught theology in the cathedral at Valencia.