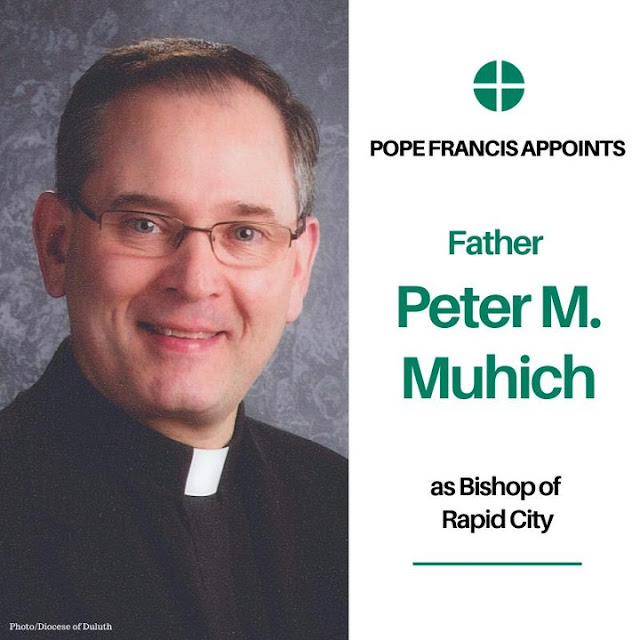 May 12, 2020
WASHINGTON—Pope Francis has named Father Peter M. Muhich, a priest of the Diocese of Duluth as the Bishop of Rapid City.

The appointment was publicized in Washington, D.C. on May 12, 2020 by Archbishop Christophe Pierre, apostolic nuncio to the United States. The Diocese of Rapid City has been a vacant see since July 2019.

Bishop-elect Muhich was born on May 13, 1961 and ordained to the priesthood on September 29, 1989 for the Diocese of Duluth. Father Muhich attended Eveleth High School in Eveleth, MN and University of St. Thomas in Saint Paul, MN. He studied theology at American College of Louvain in Belgium.

Father Muhich’s assignments in the Diocese of Duluth after ordination include: Parochial Vicar at St. Francis Parish in Brainerd (1989-1991); Parochial Vicar at St. Joseph, Grand Rapids; Our Lady of the Snows in Bigfork and St. Theresa in Effie (1991-1993). Pastor at Holy Rosary in Aurora (1993-1996); Pastor at Queen of Peace in Hoyt Lakes (1993-1996); Pastor at St. Rose in Proctor and St. Philip in Saginaw (1996-1998); Pastor at Blessed Sacrament, St. Leo and Immaculate Conception in Hibbing (1996-2009). He has served as Pastor at St. Mary Star of the Sea and at Our Lady of Mercy in Duluth (2010), and in 2019, he served as Interim Administrator at St. Francis in Carlton and Sts. Mary and Joseph in Sawyer. Bishop-elect Muhich has served as Administrator at the Cathedral of Our Lady of the Rosary in Duluth where he currently serves as Rector.

The Diocese of Rapid City is comprised of 43,000 square miles in the State of South Dakota and has a total population of 227,211 of which 23,934 are Catholic.
Source: Full Text Release USCCB - Image Source: Google Images
Posted by Jesus Caritas Est at 9:07 AM