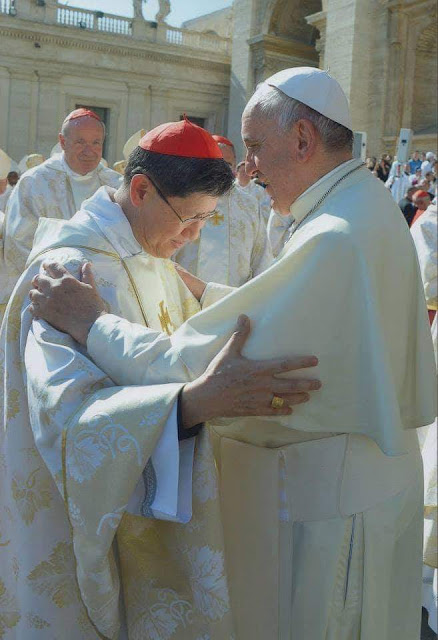 Pope Francis has named two new Cardinal-Bishops and Vice Camerlengo according to Vatican News.
Cardinal Luis Antonio Tagle and Cardinal Beniamino Stella are the newest members of the Order of Bishops within the College of Cardinal, and Archbishop Ilson de Jesus Montanari becomes the new Vice Camerlengo of the Holy Roman Church.
By Vatican News

Pope Francis has elevated Cardinal Luis Antonio Tagle to the rank of Cardinal-Bishop.

The appointment was made in an audience granted to Archbishop Edgar Peña Parra, Substitute for General Affairs for the Secretariat of State, on 14 April 2020. In naming Cardinal Tagle to the Order of Bishops, Pope Francis made him equal in all respects to those Cardinals with suburbicarian Churches.

Cardinal Tagle has served as Prefect of the Congregation for the Evangelization of Peoples since February 2020.

The Holy Father has also promoted Cardinal Beniamino Stella, Prefect of the Congregation for the Clergy, to the Order of Cardinal-Bishops, granting him the “title” of the suburbicarian Church of Porto-Santa Rufina.

Archbishop Montanari is the secretary for the Congregation for Bishops. As Vice Camerlengo, he will work alongside Cardinal Kevin Farrell, the Prefect of the Dicastery for Laity, Family, and Life, who was named Camerlengo by Pope Francis on 14 February 2019.

The Vice Camerlengo assists the Camerlengo in carrying out his duties, which include the formal certification of the death of a reigning Pope, as well as the care and administration of the temporal goods of the Holy See during time of sede vacante (the period between the death of the Pope and the election of his successor).
Source: VaticanNews
Posted by Jesus Caritas Est at 8:11 AM