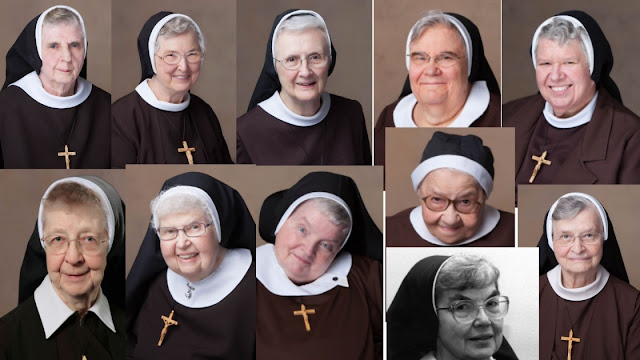 One convent of Felician Sisters saw the Deaths of 11 of their Sisters during the month of April while the Coronavirus Pandemic was spreading. At least five of their deaths were linked to COVID-19. The other deaths are not yet confirmed to have been linked.
These Sisters belonged to a convent which was started 80 years ago. They served all groups of people in education, and in care for the sick. They were also devoted to the poor.

Sister Mary Martinez (Virginia) Rozek, 87
Sister Mary Martinez (Virginia) Rozek taught elementary, middle and high school at several schools in Detroit and, with a degree in French, also taught foreign languages at Madonna. She was principal at schools in Garden City, Detroit and Hamtramck, as well as in Pomona, California.
She died on April 28.
Edited from Michigan Health Watch - www.bridgemi.com
and www.feliciansistersna.org/
Posted by Jesus Caritas Est at 1:19 PM

Heaven has a lot of beautiful souls to praise God now.How happy they are to see Jesus and Our Lady ,what happiness they have now.There beauty will be missed on earth but be happy for them

May the Lord give them eternal life

May souls of the relegious servants the nuns and the priests rest in peace.

May the souls of these Beloved Sisters RIP and be guided up to Heaven to be with Our Almighty Father.

May their soul's rest in peace

Eternal life in heaven grant them Lord. Most of them Polish nuns. Is there any left? In Jesus name 🙏🙏

May their souls rest in eternal peace

The souls of the just are in the hands of God. Rest in eternal peace.

More saints in heaven to pray for us. RIP
please dear sisters pray for my vision! After spending so many years in God's
service I know you have special places in the heart of God!

As sad as it is to hear about nuns passing away (I think of my Grandma who use to be a nun), a headline like this is what causes wide-spread panic. The article states: "...five of their deaths were linked to COVID-19. The other deaths are not yet confirmed to have been linked."

Four of those nuns were in their 90s—including one that was 99 years old. Four were in their 80s, two in their 70s and one, tragically, only 69. But most won't read those details, and instead will see this headline as an opportunity to spread fear instead of facts.

May their souls rest in eternal peace

Fear instead of facts? Which facts? 80000 dead in US? Potus playing golf fundraising and holding rallies while Italy and Spain were exploding with the virus?

I was taught by the Felician Sisters at St. Adalbert's School in Elizabeth, New Jersey from the 1960s until 1971. May the souls of these sisters rest in God's eternal presence.

How very sad. I had Felicians in grade school at St. John Vianney in Grand Rapids, Michigan. The ones I had, wore a different habit. God bless them.

My prayers go up for these sistes, their community and families. As a religious brother myself, I know the heart ache this causes in community.

I was educated by Felician nuns at Pomona Catholic High school, Pomona in the early '60s. It is disappointing that nuns aren't well taken care of in their older years, unlike priests who are coddled by women in the church membership. The Carmelite sisters in Alhambra and Duarte nurse their elderly nuns with care and respect. They are primarily a nursing order. Also the Sisters of Immaculate Heart of Mary, who educated me at Immaculate Heart College, Hollywood struggle very hard to take care of their aged and infirm. Again Cardinal Mcintyre did everything possible to destroy the order...He turned doners away from the college and the progressive nuns and took many of their properties away

Each one of these beloved sisters leaves behind a truly wonderful legacy, enriching the lives of so many throughout their lives. Eternal rest grant unto them, O Lord, and let perpetual light shine upon them. May they and all the souls of the faithful departed, through the mercy of God, rest in peace.

I was "raised" by Felician sisters. I thank God everyday for everything they taught me. He only takes the best home to Him.

May God remember them in His heavenly arena, you have fought a good war rip

May the souls of the departed nuns rest in perfect peace

May you find peace with our Lord. Please pray for us sisters and the church you loved.

May the good God rest their souls in eternal peace. Amen.

May the Lord rest their souls in eternal life Amen

A point very well made thank you.

I know they are with you now Lord Jesus. Comfort those who are left on this earth for a while longer. Strengthen them in their grief, and give then joy in te memories they created with these Sisters.

May God embrace their soul in his Eternal Kingdom. I was raised by the Canidian Missionary of the Immaculate Conception. I still have a wonderful memories of them.

May God rest there souls in eternal peace Amen

Please intercede for the mentally ill who are thrown on the street (in the name of justice) arrested for trespassing, and then treated abominably.

What city in Michigan?

May they all rest in peace.

One of the most saddest stories related to the virus May they all rest in peace.

May the angels lead them into Paradise!

Eternal Rest Grant into them OH Lord. Let perpetual light shine upon them. May their souls and the souls of all departed through the Mercy of God Rest in Peace. Amen

I am now an Atheist. I was however taught by one really great nun in elementary school (Sister Marie Theresa in the mid to late '70s at Ascension School in Minneapolis MN). That one great nun is probably the only reason I still have respect for the Catholic faith. I too fear that nuns that have become seniors are not well enough taken care of in large part because women are not as revered as men are in the Catholic faith. This is a pity. Most of us who attended school and/or have been cared for by nuns would hopefully agree that the nuns are the ones that do the work, the priests are the ones that receive the credit.

I hope each of these ladies were able to pass with dignity and with the least amount of pain and discomfort possible. I do hope hospice was granted to them as I have seen them granted it to my Mother.

May all souls rest in peace in heaven,amen

My their soul rest in peace

Such dedicated Sisters, giving their lives to the service of others, and staying true to their vocations! If anyone is, they're now enjoying their eternal reward in Paradise!

God loved them than us. May their souls rest in eternal peace.

May these sisters rip and fly with there well deserved wings!
God Bless them and welcome to heaven.

So sorry for this loss. :( Hopefully they can find another one who could perform the church organ.

Well done, thou good and faithful servants! enter heaven where God has prepared a place for you.

The Lord God has received these awesome women who have committed their lives to him with love and peace. We who are left miss them but are glorified in there love for our Lord God.

May their Memories live in Eternity.....

May their soul rest in internal peace

May they rest in everlasting peace.

God bless their souls. RIP with Our Lord. ♡

Sadly it doesn't seem like you read the headlines. It didn't say they died of COVID-19 it said "during the pandemic of COVID-19" which is a fact. The pandemic is STILL GOING ON!!

May the Lord rest their souls in eternal peace

May these true and faithful servants rest in peace. God bless u for all that u did. So sorry for the world's loss.