Saint May 14 : St. Matthias Apostle the Patron of Alcoholics and Carpenters - with Prayer 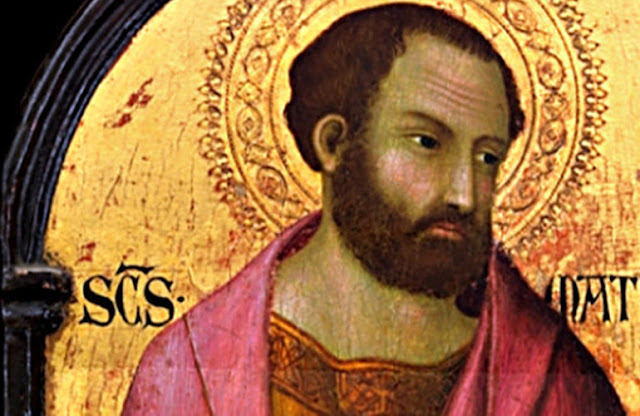 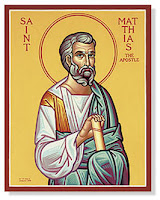 Apostle. The Greek Matthias (or, in some manuscripts, Maththias), is a name derived from Mattathias, Hebrew Mattithiah, signifying "gift of Yahweh." Matthias was one of the seventy disciples of Jesus, and had been with Him from His baptism by John to the Ascension (Acts 1:21-22). It is related (Acts 1:15-26) that in the days following the Ascension, Peter proposed to the assembled brethren, who numbered one hundred and twenty, that they choose one to fill the place of the traitor Judas in the Apostolate. Two disciples, Joseph, called Barsabas, and Matthias were selected, and lots were drawn, with the result in favour of Matthias, who thus became associated with the eleven Apostles. Zeller has declared this narrative unhistoric, on the plea that the Apostles were in Galilee after the death of Jesus. As a matter of fact they did return to Galilee, but the Acts of the Apostles clearly state that about the feast of Pentecost they went back to Jerusalem. All further information concerning the life and death of Matthias is vague and contradictory. According to Nicephorus (Church History II.40), he first preached the Gospel in Judea, then in Ethiopia (that is to say, Colchis) and was crucified. The Synopsis of Dorotheus contains this tradition: Matthias in interiore Æthiopia, ubi Hyssus maris portus et Phasis fluvius est, hominibus barbaris et carnivoris praedicavit Evangelium. Mortuus est autem in Sebastopoli, ibique prope templum Solis sepultus (Matthias preached the Gospel to barbarians and cannibals in the interior of Ethiopia, at the harbour of the sea of Hyssus, at the mouth of the river Phasis. He died at Sebastopolis, and was buried there, near the Temple of the Sun). Still another tradition maintains that Matthias was stoned at Jerusalem by the Jews, and then beheaded (cf. Tillemont, "Mémoires pour servir à l'histoire eccl. des six premiers siècles", I, 406-7). It is said that St. Helena brought the relics of St. Matthias to Rome, and that a portion of them was at Trier. Bollandus* (Acta SS., May, III) doubts if the relics that are in Rome are not rather those of the St. Matthias who was Bishop of Jerusalem about the year 120, and whose history would seem to have been confounded with that of the Apostle. The Latin Church celebrates the feast of St. Matthias on 24 February and the Greek Church on 9 August. [Note: After this article was written, the Latin Church moved the feast of St. Matthias to 14 May.]
Clement of Alexandria (Stromata III.4) records a sentence that the Nicolaitans ascribe to Matthias: "we must combat our flesh, set no value upon it, and concede to it nothing that can flatter it, but rather increase the growth of our soul by faith and knowledge". This teaching was probably found in the Gospel of Matthias which was mentioned by Origen (Hom. i in Lucam); by Eusebius (Church History III.25), who attributes it to heretics; by St. Jerome (Praef. in Matth.), and in the Decree of Gelasius (VI, 8) which declares it apocryphal. It is at the end of the list of the Codex Barrocciamus (206). This Gospel is probably the document whence Clement of Alexandria quoted several passages, saying that they were borrowed from the traditions of Matthias, Paradoseis, the testimony of which he claimed to have been invoked by the heretics Valentinus, Marcion, and Basilides (Stromata VII.17). According to the Philosophoumena, VII, 20, Basilides quoted apocryphal discourses, which he attributed to Matthias. These three writings: the gospel, the Traditions, and the Apocryphal Discourses were identified by Zahn (Gesch. des N. T. Kanon, II, 751), but Harnack (Chron. der altchrist. Litteratur, 597) denies this identification. Tischendorf ("Acta apostolorum apocrypha", Leipzig, 1851) published after Thilo, 1846, "Acta Andreae et Matthiae in urbe anthropophagarum", which, according to Lipsius, belonged to the middle of the second century.
This apocrypha relates that Matthias went among the cannibals and, being cast into prison, was delivered by Andrew. Needless to say, the entire narrative is without historical value. Moreover, it should be remembered that, in the apocryphal writings, Matthew and Matthias have sometimes been confounded. Text - Catholic Encyclopedia - Image source Google
Prayer : O God, who assigned Saint Matthias a place in the college of Apostles, grant us, through his intercession, that, rejoicing at how your love has been allotted to us, we may merit to be numbered among the elect. Through our Lord Jesus Christ, your Son, who lives and reigns with you in the unity of the Holy Spirit, one God, for ever and ever.
Dear Jesus, on this Feast of this added Apostle, Matthias, I thank you for numbering me among your Apostles. Help me to remain in your love, each and every day, in the midst of the things you ask of me, in the ways you ask me to witness to your own merciful love for others. I ask this with faith in the power of your Spirit among us. Amen. May the Lord bless us, protect us from all evil and bring us to everlasting life. Amen.