Saint May 19 St. Crispin of Viterbo a Franciscan Lay Brother who Died 1750 and Remains Incorrupt 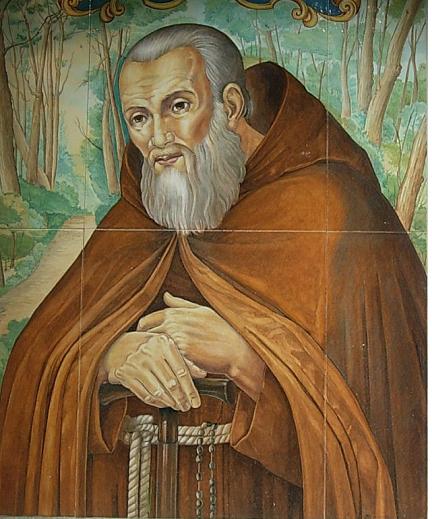 Born:
13 November 1668, Viterbo
Died:
19 May 1750, Rome
Canonized:
20 June 1982 by Pope John Paul II
Friar Minor Capuchin; b. at Viterbo in 1668; d. at Rome, 19 May, 1750. When he was five years old, his pious mother took him to a sanctuary of the Blessed Virgin, a short distance from Viterbo, where she consecrated him to the Mother of God and placed him under her special protection. The child grew beyond his years in virtue and science of the saints; so that the townsfold of Viterbo were wont to call him il Santarello, the little saint. As Crispin one day saw the Capuchin novices walking in procession, God inspired him with the desire to embrace the religious life. He was shortly afterwards received into the Franciscan Order as a simple lay brother. Having been employed for some time as cook in the convent at Viterbo, he was sent to Tolfa, a town not far distant from Civita Becchia, to fulfil the same office. Thence he was sent to Rome and finally to Albano. Here Crispin was visited by the men of the world, by bishops and cardinals, and even by the pope himself, who always took delight in conversing with the humble lay brother. It was Crispin's constant endeavour to imitate the virtues of his patron, St. Felix of Cantalice, whom he had chosen as his model of perfection at the beginning of his religious life. Like St. Felix, he used to call himself the ass or beat of burden of the Capuchins, and, having on one occasion been asked by a stranger why he went bare-headed, Crispin answered jocosely, that "an ass does not wear a hat." Enfeebled by old age and by his numerous austerities, he was sent to Rome by his superiors, there to end his holy life. His body, which even at the present time is still in a remarkable state of preservation, rests under one of the side altars in the church of the Capuchin Fathers in Rome. Blessed Crispin was solemnly beatified by Pope Pius VII in 1806.
(Taken from Catholic Encyclopedia)