Saint May 28 : St. Bernard of Montjoux where we get the name of St Bernard Dogs and Patron of Skiers, Climbers 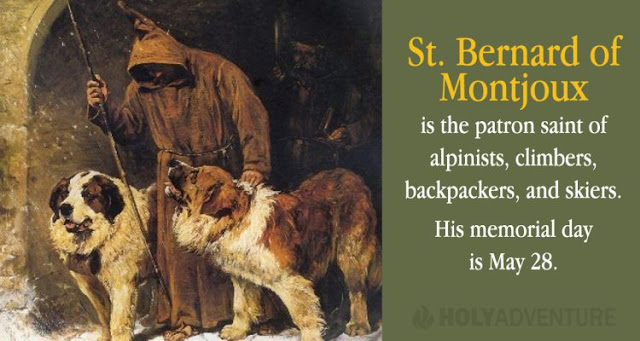 The St. Bernard dogs are named after him. Born in 923, probably in the castle Menthon near Annecy, in Savoy; died at Novara, 1008. He was descended from a rich, noble family and received a thorough education. He refused to enter an honorable marriage proposed by his father and decided to devote himself to the service of the Church. Placing himself under the direction of Peter, Archdeacon of Aosta, under whose guidance he rapidly progressed, Bernard was ordained priest and on account of his learning and virtue was made Archdeacon of Aosta (966), having charge of the government of the diocese under the bishop. Seeing the ignorance and idolatry still prevailing among the people of the Alps, he resolved to devote himself to their conversion. For forty two years he continued to preach the Gospel to these people and carried the light of faith even into many cantons of Lombardy, effecting numerous conversions and working many miracles. 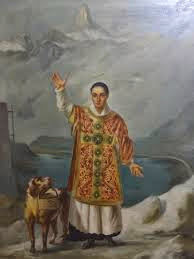 For another reason, however, Bernard's name will forever be famous in history. Since the most ancient times there was a path across the Pennine Alps leading from the valley of Aosta to the Swiss canton of Valais, over what is now the pass of the Great St. Bernard. This pass is covered with perpetual snow from seven to eight feet deep, and drifts sometimes accumulate to the height of forty feet. Though the pass was extremely dangerous, especially in the springtime on account of avalanches, yet it was often used by French and German pilgrims on their way to Rome. For the convenience and protection of travelers
St. Bernard founded a monastery and hospice at the highest point of the pass, 8,000 feet above sea-level, in the year 962. A few years later he established another hospice on the Little St. Bernard, a mountain of the Graian Alps, 7,076 feet above sea-level. Both were placed in charge of Augustinian monks after pontifical approval had been obtained by him during a visit to Rome. These hospices are renowned for the generous hospitality extended to all travelers over the Great and Little St. Bernard, so called in honor of the founder of these charitable institutions. At all seasons of the year, but especially during heavy snow-storms, the heroic monks accompanied by their well-trained dogs, go out in search of victims who may have succumbed to the severity of the weather. 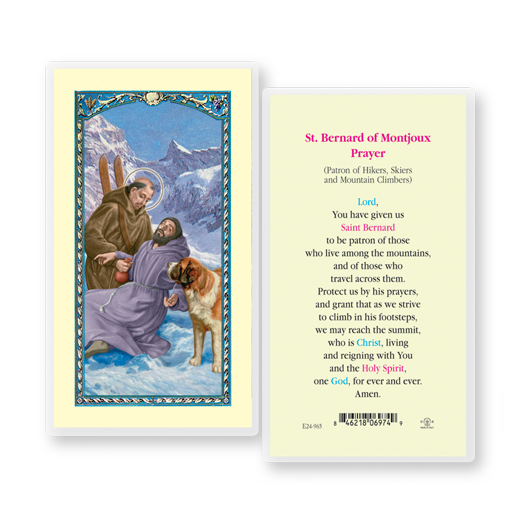 They offer food, clothing, and shelter to the unfortunate travelers and take care of the dead. They depend on gifts and collections for sustenance. At present, the order consists of about forty members, the majority of whom live at the hospice while some have charge of neighboring parishes. The last act of St. Bernard's life was the reconciliation of two noblemen whose strife threatened a fatal issue. He was interred in the cloister of St. Lawrence. Venerated as a saint from the twelfth century in many places of Piedmont (Aosta, Novara, Brescia), he was not canonized until 1681, by Innocent XI. His feast is also celebrated on the 15th of June in some Calendars. (From the Catholic Encyclopedia)