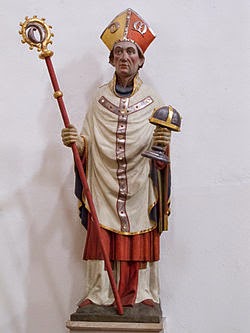 St. Godehard of Hildesheim
BISHOP
Born:
960, Reichersdorf, Bavaria
Died:
May 4, 1038
Canonized:
1131, Rheims by Innocent II
Patron of:
ravelling merchants; invoked against fever, dropsy, childhood sicknesses, hailstones, the pain of childbirth, and gout; invoked by  those in peril of the sea
He was a native of Bavaria, and abbot of Altaich, in that country, and reformed likewise the abbeys of Hersfeld, in Hesse, of Tergensee, in the diocese of Frisinguen, and of Chremsmunster, in that of Passaw. In 1021, the episcopal chair of Hildesheim falling vacant by the death of St. Bernward, St. Godard was compelled by St. Henry to take upon him that pastoral charge. The relief of the poor, both spiritual and temporal, was everywhere the first object of his attention. He died on the 4th of May, 1038, and was canonized by Innocent II in 1131. Many places in Germany acknowledge him patron, and several bear his name. See his life by Wolfhert, his disciple, in Henschenius, p. 501, and in Mabillon: and more at large, with long histories of miracles, among the writers of the history of the most illustrious house of Brunswick-Hanover, t. 2, p. 483. Several very devout epistles of St. Godard, or Godehard, are given us by Dom. Pez, in his Codex Diplomatico-Historico-Epistolaris, p. 133, & c. Lives of the Saints by Alban Butler