Saint May 6 : St. Eadbert a Bishop of England who spent his time alone in abstinence, prayers, and tears 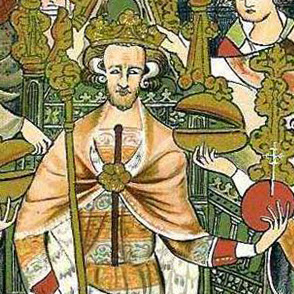 Born:
7th century England Died: May 698
Venerable Bede assures us, that this holy man excelled both in the knowledge of the holy scriptures, and in the observance of the divine precepts. All his lifetime he was remarkable for his alms-deeds, and it was a law with him to lay aside yearly the tenth part of his goods for the poor. He was ordained successor to St. Cuthbert, in the see of Lindisfarne, in 687, and most worthily governed that church eleven years. It was his custom twice a year, in Lent, and during forty days before Christmas, to retire into a solitary place, encompassed by the waters of the sea, where St. Cuthbert had for some time served God in private before he went to the isle of Ferne. St. Eadbert spent this time remote from all company, in abstinence, prayers, and tears. St. Cuthbert had been buried about eleven years, when the brethren desired, with the approbation of Eadbert, to take up the bones of that eminent servant of God, whose life had been signalized by many illustrious miracles. Instead of dust, to which they expected they were reduced to their great surprise they found the body as entire, and the joints all as pliable as if it had been living—all the vestments and clothes in which it was laid were also sound, and wonderfully fresh and bright. The monks made haste to inform the holy bishop, who was then in his Lent retreat, and they brought him part of the garments which covered the holy body. These he devoutly kissed, and ordered that the blessed body should be laid in other garments, put into the new coffin which was made for the holy relics, and, for greater veneration, placed above the pavement in the sanctuary. He added, that the grave which had been sanctified by so great a miracle of heavenly grace, would not remain long empty. This was accordingly done, and presently after Eadbert, the bishop beloved of God, fell dangerously sick, and his distemper daily increasing, on the 6th of May following he departed to our Lord. His body was laid in St. Cuthbert's grave, and over the place was deposited the uncorrupted body of that glorious servant of God. "Miracles here wrought from time to time, in curing the sick, bear testimony to the merits of them both," says Bede. The same historian informs us, that St. Eadbert covered with lead the church of Lindisfarne, which was dedicated by the archbishop Theodorus, under the patronage of St. Peter. It had been formerly built by bishop Finan, after the Scottish fashion, of oak boards and thatched with reeds. source: Lives of the SaintsHoly/saints/WrittenbyAlbanButler - Edited